See, not long back when I was seventeen
When I walk in the jam, suckers look at me mean
They wouldn't give me respect, told girls I was a whack
You shouldn't have did that brother, I'm here for the payback

They said I live in a slum, my father's a bum
They said my sister's a crackhead, my brother's drinkin' Rum
But I didn't let it bother me took my time
Sat at the kitchen table wrote my rhymes

And now that I'm eighteen, I'm not a kid no more
I could walk in a nightclub and wop across the floor
I'm a show you I'm good
Make you wish that you could do the things that I do
If I could teach you I would

See, back then you didn't like me, I stayed in your path
See my name on a flyer, you giggle and laugh
Tell people I'm soft when I could really get off
You didn't know it, now I show it, I'm the Hip Hop boss

See, people like you are known for fakin'
Frontin' and bluffing and perpetratin'
Biting and lyin' and always waitin'
For me to come around and see how much I'm makin'

See, money I got, 'cause I'm a pro at this trade
You thought you got away but you're about to get paid
You told girls I was wack, shouldn't have did that brother
Look, I'm King Tee and my payback's a mutha

As I talk you get madder because the crowd starts to notice
A professional rhymer, yeah, you must know this
I'm cooler than most, most of all I'm so cool
Never smacked on the crack because I'm too busy in school

See, I just think you're jealous and you envy my style
You hear my rhymes, say it's weak but in your mind you're sayin', "Wow"
Tell people I'm ugly and I got big lips But as I walk by your girl she wanna ride king's tip

Going down in fame just remember my name
Not a sapoe with a Afro
A king with a brain, if a sucker gets beef
And wanna battle, let 'em come
We'll discuss it over lunch and drink some one-fifty-one

After that I set a trap even though I feel tipsy
The crowd starts to clap and I ain't even got busy
I'm great, some even say I'm a genius
You said my crew was whack, you haven't even seen us

So I'll get you back, can't survive too long
Tellin' lies about the king but I could take it, I'm strong
Got a Emmy in Rap for usin' my cool strategy
Rappin' was nominated to get a Academy

The girlies I get, suckers
Probably get mad at me but I don't care
King Tee is the baddest

See, Fila's my trademark, I'm going for a medal
Letting off some steam like fire to the kettle
Sportin' real gold and a baseball cap
You better look out punk, I'm here for the payback

Down and I'm hard when I'm rockin', I'm smooth
I get a trophy for mostly doin' B-Boy moves
Affiliated with a posse let me go down to the list
Scotty Dee,Keith Cooley and Cold Crush Chris

Vatchiek's a pro, he's also down with the crew
The master mind of the drum, D.J. Cool Pooh
If you ever get souped up, you'll look like a poot butt
You'll ask me to stop and I ask you to do what

I won't stop till I paid you back
By the time I'm through with you
You'll wanna smoke some crack
Because I'm the King tee, there is no other
Ya better get ready my payback's a mutha
Explain lyrics
Correct lyrics 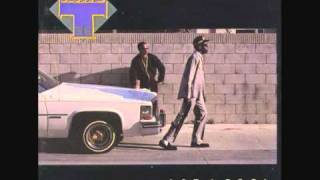