[Verse 1]
Just another night in my Philly
Will get dreams ain't worth a penny
We celebrate life every night, toast a (?)
I feel it in me, it's frustratin' enough
to watch the lil' homies on the grind tryin' to come up.
But look at me: the older generation O.G.
Tryin' to shake these nine-ounce into a key
Thinkin' major, knowin' all the time I need to save ya; the anger
I thank the feds for playin' on my pager!
Huh, but in still I smash out without fright
And raise the six hundred headlights through the night
Keep it tight! My reputation stands well
Cuz all the good niggas are either dead or in jail
Let's ?pretend? For one second hustlas who had riches
Stop flossin' for these fake ass bitches
Puttin' all these G's turned snitches but it's (?) these days
Ya homeboy will put you in ya grave…

[Chorus: 2x]
And I don't wanna die but if I do
Homies, don't cry! I did so much dirt I should fry
And, loc, sometimes I don't wanna come outside
But I'm all G'up, so let's ride!

[Verse 2]
I wake up every morning the same
?Hollowed? with my grains
Peepin' out my window for the change
But all I see is pain. I sold out my soul for the game
Familiar. Dat's why I gang bang, dat's why I slang ‘caine.
I gots to maintain for what's I head
My baby-momma bringin' mo' drama than the feds.
But I ain't scared of all the automatic full of lead I'm proof for the livin' walkin' dead!
I'm rollin' wit some niggas prepared for anything, anywhere
Anytime fag in the hood are over there.
Dat's my outlook on life until it ends
A pocket full of chips and a Benz.
Shakin' all them so-called friends because they scheme and they plot
To lay me down and get what I got
We're runnin' off their spots wit glocks and fo-fo's like vets
And before I leave I cross out their set!

[Interlude:]
"But, you know, it's like everybody I hear
wanna be a tough guy killa, a gangsta, you understand?
But, ah, most of the gangstas and killas I know (?) dead"

[Verse 3]
I don't wanna die but I see the devil's walkin' his flame (?)
Callin' my name like he know me
I pray dat god (?) his (?) foe me, show me a sign!
I be right here on the front line in this war zone
Tryin' to get mine before it's time.
But as I step over bodies dat I peeled
The vision hell's angels and the field (?)
Wavin' at me, getting close witta fat grin on the (?)
But they always take the niggas dat I killed
G, the situation is ill, I feel my turn's probably next
Dat's why I sport a bulletproof vest, but I stress
All it takes is one shot to the dome
Now your family's sittin' in the front row when you're gone 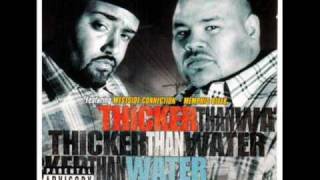