[king tee]
Yo whassup, it's king tee on the vocals
I rock the coolest rhymes, from here to acapulco
I drive a cadillac, not a played out desoto
Look I'm fin' to pose, photographer take my photo
Cool is back, in fact I'm comin exact
It's mc breeze and king tee, and pooh on the track
So we all got together, and thought of a freestyle
Gather round the stage, and come see how
Pros go for what they know and get paid for it
And I brung along the breeze, so you can enjoy it
.. and to fans I'm an idol
It's me and breeze, "just clowning" is the title
Get up what's happening? i'm a king, not a captain
Do the most coolest rappin, talk smack I'll be gat'n
I'm the king tee punk, and I don't talk junk
But I do smoke blunt, love rappin to funk
You know the mic is like a vine I swing on it like tarzan
I drink a coke and hit a note like barbara streisand
Step up, fess up, stand around and
Get down to the song "just clowning"..

[mc breeze]
Well I happen to be, hopin to be, a big-timer
A dope rhyme and you won't find a
Nother mc who can get with this program
Served by no one, I mean no man
You say I'm good it's the truth, you're not soupin
I take it as a compliment and keep troopin
Unlike most you know I never stop flowin
My name is mc breeze cause I'm the master at blowin
Rhymes and lyrics, that is my specialty
I'm high-fidelity, you can't mess with me
Don't even think you can just sneak up
On bein number one, is a high that I'm stuck on
I'm on a mission, wishin, all the time you spend
That you would make a legend or a monument
I'm not souped up, or a pooh-butt
I only lay my voice on a track that pooh cuts
A beat is like food for thought so I eat it
I'm feelin kinda hungry pooh so just feed it
Keep the bass poundin I like the way it's soundin
Pooh is gettin ill while me and tee are "just clowning" .. "it's the joint!" (repeat 2x)

[king tee]
I've been rappin for a while, I'm acquirin chapstick
Like a magician with the mic I do a hat trick
I don't wear a cape, or perform at a sideshow
Let me hit the 40 cause my throat is kinda dry yo
When I'm on stage it's like a broadway play
King tee and mc breeze and jennifer holiday
But breeze, my throat's gettin so'
{*rasping*} get on the mic and won'tcha give it a go

[mc breeze]
Clowning, is like actin ill sometimes
But when I ill, I like to say a dumb rhyme
To increase my fame and star stature
I'm like anita baker I'm caught up in the "rapture"
Hittin like bolos when I go solo
Last name is spanish but yo, I'm not a cholo
Keep the bass poundin, I like the way it's soundin
Pooh is gettin ill while me and tee is "just clowning"

[king tee]
But but but breeze.. you know me and you can clown right, right?
We gotta see if.. mixmaster spade can do it

[mixmaster spade]
Well it's tuesday night, I got nuttin to do
I guess I'll get on the phone and call dj pooh
Say "whassup pooh? are you beat? "
He say "forget that stuff, let's hit the street"
Since I got a caddy, and you got a z
I can roll witchu, or you can ride with me
I say "we goin to a club that's dynamite" (where? !)
The red onion on a tuesday night
I walked in and glanced, shook a few hands
Grabbed the baddest broad, then I commence to dance
I looked the dj, and said "whassup? "
He said "spade's in the place and he's +doin the butt+"
Now I'm back to the rap that we have at hand
I'm the mixmaster man with the master plan
I slapped the girl on the butt then she started to frown
And ..

[king tee]
Yo spade, cool out! man, we "just clowning" 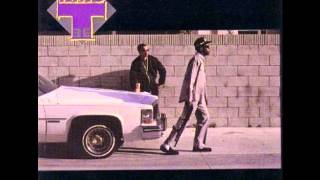