[Intro]
Dementia
Essentially the things that make us higher thinking beings
Our memory, our way of calculating, of planning, language
They are degenerating
Dementia is anything which is affecting the brain and the loss of function of the brain
In such a way that the things that we normally take for granted for example
Our ability to remember things, times, dates, events
To place ourselves in a location, to use words, to use language
All of these things begin to disappear

[Verse 1]
Mama didn't plan me, that felt really weird
Then she birthed a nigga, daddy disappeared
Universe was with us, glad I'm living here
Through the dirt we live, lord had to interfere
Doing work he moving bourbon to pursue a cooler dirt to sit in that is really clear
You revert then leave 'em back to this career
Didn't recognize her, had it been a year
Mama sacrificed to have a living here
Went through many troubles as a kid she feared
Nightmares on the daily, that's my mental, yeah
Speaking on me dying as an infant tears
Running down her face while judges count the days
I'm shackled in the courtroom asking them to hear
My plea to tell 'em that I'm sane but they don't feel the same
Because of how I act, the end is near
Banging, slanging plus we strap the pistol here
Do a bunch of drugs, had my memory cleared
If these straps I'll blackout mad and then appear
Been a King but never had a Gwynevere
I forgot it all, blast it with the fear
Had a baby made the facts so crystal clear
Master what I'm speaking grab a engineer
Give it to the world but as I give it here
Know my brain is sick, ain't had a freaking cure
Medication had me acting insecure
Made a rap and f*cking had to get some gear
Looking in the mirror: that's my biggest fear
Dancing with the devil ask and he'll appear
Spell out "He'll appear" that shit really weird
Scared to lose myself god asking if you'll steer
Hell and Heaven point like that's each hemisphere
And as my memory clears
[Hook]
I don't wanna lose part of me (Dementia made me lose it)
Will I cover that broken piece (Man this is so confusing)
Stay bold, embody me, hurt the feelings (Got so inflicted in the music)
But this is more than music

[Verse 2]
Searching for a purpose, it can get really hard
If you make it that way and then forget who you are To find our self we take trips from afar
I went through dark matters just to live with the stars
My stomach is a compass, I encompass what it means
I wanna see my destiny fulfill, the window's ajar
I'm a caterpillar in it then I went for a walk
Penned my situation and flew like Kendrick Lamar
Damn, ask yourself: is this who you are?
Situational relationship, your friends or your job?
A diagnosis givin' your addiction a cause
Go places evil waiting see your kids have revolved
Don't wanna fear who you are
Your religion is fraud and you live what you are
So you sit in the dark with a bunch of sickening thoughts
And when they give up it all but
Would you lose everything homie then you evolve
Am I a criminal? No
But the prison it caused though my memory's lost
I remember the wall
While fulfilling the dream I forget that I fall
But I'm still on a seam where the shit had to start
Y'all did this to me then I did it to y'all
Right ear's what it's in, you know how it is but you wrong
'Cause I revisit the screams, blood spilled down the wall
Now I'm numb to those things, I can't feel anymore
Are you hearin' me lord? I'm not here anymore
Then what I wanna be but I feel you ignore
Brain in a white cube more than ceiling and floor
Boxed in but that's what the fifth dimension is for
I know it's way more than a physical form
Listen my realm can never coexist with the norm
I swear I met the old me in the continuum path
I said don't forget me, dementia ain't long
This how it feels to be lost
[Hook]
I don't wanna lose part of me (Dementia made me lose it)
Will I cover that broken piece (Man this is so confusing)
Stay bold, embody me, hurt the feelings (Got so inflicted in the music)
But this is more than music 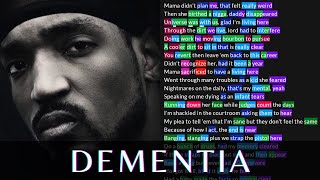