[Verse 1]
Uh, in living color, I don't wanna die
Told Jesus I don't wanna drive
Had to whip and went from slave to master
Then I cut a slice of the humble pie
Iso they tried to undermine
Now they names come under mine
Now I'm winning, check the f*cking score
You just underscore like an underline
I pull up in a tank like filling up the ride
You be busting but blanks man, but the other guys
I mark a nigga like Wahlberg
And spit with the Mossberg
The Will like Ferrell for acting funny guys
Like Kanye I waited to get my money right
Anywhere you could run and hide
Make a cake with no Duncan Hines
When I was a po' pimp, shame, run or ride
Now it's do or die, suicide? Yeah, f*cking right
Bitches jacking on me, they want me to f*ck tonight
Because a nigga flexing on them like look at the muscle size
I muzzle bitches like a puppy bite
'Cause back then they didn't wanna give a buddy love
Professor Klump was right
I be rolling like Eddie how f*cking right
Petty niggas wanna fight, I got 'em in my feet, that shit funny right?
I'ma egg 'em more 'cause I'm up niggas, sunnyside
Pac said to go to war, 'less you got your money right
So I declare war and I ain't seen a thumb in sight
Unless it's Facebook when I get a bunch of likes
Life's a game of cutthroat, play your cards right
Choke and let Trump decide
Now I'm mobbing, chilling in attire
Nightclub's Jimmy John's number nine
On ten, thanks to number nine

[Hook]
And I'm throwing up them dubs up now 'cause I won a war, yeah
Bitch I got my funds right, now I won a war (yeah)
Gripping on my guns tight, now I won a war (yeah)
Niggas better jump right 'fore I declare war
f*ck it, I declare war, I declare war, I declare war, I declare war
Bitch I got my funds right, I declare war
Gripping on my guns tight, I declare war [Verse 2]
Uh, I seen Birds in the Trap like Travis
And got away scot-free, ask Travis O'Guin
Now I'm with the Snake and Bat, bitch
Practice a dope flow and make it backflip
I'm like Dominique Dawes off acid
Eating mothballs after all y'all Aspirin
Eating catfish, smoking all y'all catnip
Taking catnaps while I raw dog fat chicks
Yeah, I'm that sick
I go to war with the Devil and walk in Hell with a can of gas and the match lit
My drip godly, can't match this
Nobody f*cking with me, I be doing numbers like a math whiz
My bad, I'm high as Wiz
These other niggas dime bags I've sold, get it? Past tense
I'm as relevant as an elephant in the room you in there dressing in, tell it take a fast shit (On Who?)
On everybody in this rap shit
Or anybody in the war that hope I fail like my ass trip
My last album was a bad trip
I'm Brad Pitt, lost a bad bitch, and need rehab quick
I want war, I'm a maverick
I admit that I got my ass kicked but I'm back bitch
'Cause in general I'm marvelous with the wizardry
The cunning enemy, get it Dorothy? I captain
I got fed when I tapped in
And all these other motherf*ckers hang it up like they tapped in
Do me a favor like your back split
Try to stop my wave like on the track ends
And I'ma get to busting with the Gatling
I'm at war with these haters and they actions
I'm at war but the funny little fact is
I'm at war with myself nigga, that's it

[Outro]
A wise man once said
If you wish for peace, be ready for war
Strange Music
Explain lyrics
Correct lyrics 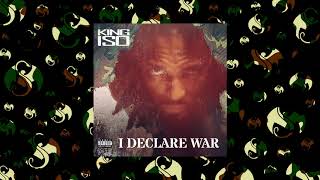