Living Next Door To Alan Lyrics

Living Next Door To Alan Lyrics


They came down from Meekathara in a burnt out blue fj
that farted and just shit itself in jutland parade
right next door to bondy's
when the smoke had cleard a voice said
'Eh this place look alright, well tell the governemt
its a sacred site, dead f*cking easy!'
good day mr allan bond how u going bloke, hey im your
brand new neighbour hey mate you gotta smoke? and i
think im gonna like it here, living next door to Allan.

24 kids 9 adults and 15 dogs a dead Roo on the roofrack
and a boot load full of grog and im flash as michael
jackson now im living next door to Allan.

The first thing that we gotta do is get another car,
cus the one sitting out the front wont even f*cking
start, we'll call that bloke again from the government
he's alright hey. so they call the bloke in charge, of
all the government grants, and the next day in the
drive way was a new mercedes benz 'eh come n have a
look at this one Edwin. this ones even got a Wireless.

Good day mr Allan Bond how you going mate? you got a
real flash car but my one's flash one hey and i believe that
my one's faster than yours mr bond coz mines a red one.

24 kids 9 adults and 15 dogs, all squeezed in the front
seat, with the wireless turned full on,listening to slim dustin now theyre living next door
to Allan.

so bondy called ben lexcen and said ' i want another
yacht twice as big and twice as fast as what i already got, that'll f*ck em'

So his neighbours call some welfare mob not to be out
done and got the HMAS Melbourne on some sort of
government loan, its got me knacked, they just said they
wanna go fishing for yabbies in the river.

Good day mr Allan bond how you going mate, you got a
real flash boat but my one's flash one hey and i think im
gonna put him in the river next door to Allan's

15 dogs 9 adults 2 dozen screaming kids with lines
strung from the flight deck trying to catch some fish,
swimming fishing pissing in the river next door to
Allan.

So bondy threw a party, the likes you've never seen and
invited everybody, from the premier to the queen, and
the Leyland brothers.

so his neighbours baked Bungarra on a barby on the
lawn, and invited all their relatives from Meekathara
to come down 'hey everyone. you all gotta bring a big
Flagon of the wabler, there's a party on at my house'

I dont know why he's leaving, or where he's gonna go,
he says he's got his reasons and i reckon that i know,
he just never got used, to living next door to Abo's

hes jumping up and down, and making such a fuss, at
least we don't got f*cking coons live next door to us,
now we got to get used to not living next door to
Allan. 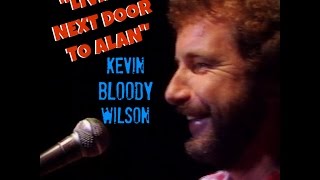 check amazon for Living Next Door To Alan mp3 download
these lyrics are submitted by kaan
these lyrics are last corrected by King 05 on October 28, 2019
Songwriter(s): Mike Chapman, Nicky Chinn
Record Label(s): 1993 Both Barrels Music
Official lyrics by