Mom, there's a dog outside, what I'd like you to see,
Mom, if it's alright I'd like to keep him here with me,
'Cause I never seen a dog like that,
He's got another head, in the middle of his back,
And he's got six legs so it be good at chasin' cats,
He's a double decker dog.

Mom, his back half's black, but his front bit's really white,
Mom, don't be frightened, he's not gonna bite,
'Cause he looks too tired, he looks worn out,
And both his heads'a got their tongues hangin' out,
And he's huffin' and he's puffin' and he's frothin' at the mouth,
Haha, he looks really really friendly.

Mom, they're cruel next door, 'cause all they did was laugh,
Mom, why you fillin' up the bucket? Do you think he needs a bath?
But you'll be right mom I can handle him meself,
And I don't need those bloody kids next door to help,
He's my double decker dog so I'll bath him by meself
And I wish they'd all just go piss off.

Mom, them kids next door are teasin' me poor dog,
Mom, they're pricks next door, 'cause now they're chuckin' rocks,
And if they hit him mom, ohh they'll be in strife,
He gets them six legs goin', they'll be runnin' for their lives And with his second set'a fangs, he could bite 'em all twice
So they better stop f*ckin' round.

Mom, them cunts next door I think they've killed me dog,
Mom, one cunt jumped the fence and kicked him in the cogs,
And the bastrard kicked him so f*ckin' hard,
Me dog took off and was headin' for the park
But he run across the road, and got skittled by a car
And it snapped me dog in half aaahhhh.

Mom! Mom! Quick, come outside, you won't believe your eyes,
Mom, it's me double decker dog, he's back, he's still alive,
And I don't know how he's done it but he's together again,
But something's different mom, I can't explain,
Well his, his front's still white, that's still the same,
But, but now his back half's brown.

(Two-headed...) come on fella, he's a clever little dog,
How did you change color like that?
He's a clever dog, mom look he's happy to see me too,
See mom he really likes me leg,
Come on fella, what are we gonna call him mom? Mom,
Mom, can I call him Obbie, haha, look, come on Obbie,
Look mom he knows his name,
Look his back half' hookin' up and down. 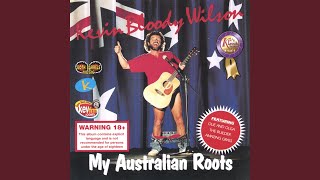