[Verse 1: ILL BILL]
My young shooter got shot in his eye, it cost big
Refused to rock a eyepatch though, so everybody knew it's him
My whole squadron
Young souls started cold hearted, emboldened the hardest soldiers and martyrs stroll through with armor
Kryptonite ain't doing shit tonight
This that Marvel Universal edit, Supreme Magnetic
They killed George Floyd, f*ck the police
Strictly cop-killer shells, no justice, no peace
Mountains of Purple Piff, house on the cliff
Fluffy duffel bags, eighteen thousand a brick
Dummies hustle grams, pay me on top of the [vig] [?]
Now that's fuzzy math, claiming that you not with this shit
Uncle Howie shot the five with that pig
(O'Malley) for gruesome crimes against the lives of humanity [?]
My spit voltage, leaves bitches insulted
Stick a ice dick in this vulture while shifting the culture

[Verse 2: Lord Goat]
The 63rd Precinct Wars, we're all coming down
Another round, my block up in flames like we underground
Defund the pigs, we pop off everything, bananas
Twelve shot hammers, digital apparatus, splattered in mattresses
Spilling blood up on the blue canvas, Milky Way
They shot him six times in his spine for trying to boost Pampers
Uzi and [my 'Goose'] start work, I peace Sampras
Two chain inter-junction, selling packs on Campus
Everything's rigged now, simulation's employed
They using body doubles, like the autopsy of Floyd
Kiss Brianna Taylor on the cheek, her week shoulda been better
But they shot her in the head while she was folding a sweater
We hit Gucci in Manhattan, overturning Crown Vics Get loud licks, we bury every Sergeant when that sound hits
Makimbo with the grips, (?) cleaver with the brown fist
Explosives under police trucks, they blown to bits

[Verse 4: ILL BILL]
Crisis an opportunity to entice a man to use a ice pick brutally
Find me where the shooters be
Fearless in a scary world, Doctor York, jerry curls, heavy (verb), crazy eighty (shirr), franken berry herb
Burn a police car, spark 'em like a pretty girl
Diddy with tassels on her titties, let that titty twirl
Tears and clutch as they hate shower they city, world
Spit up blood on my face and watch the city burn 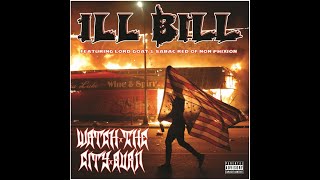