[Intro: Gumz]
Yeah, Versatile, Gumz
We 'bout to take it back to the slums

[Chorus x2: Gumz]
In the beginning back when rappers were just an infant
Cats used to kick the wisdom, now it's all about the ignorance
Rapping on the street corner wasn't about the beat format
You kick the facts and get the crowd to react

[Gumz:]
Ayo, back in the days when the Bronx had the streets locked
With graffiti artists, block parties and the beat-box
Hip-Hop was just a new invention, unintentional
They started making break-beat records
I reminisce for a second, on where it all started
'Cause nowadays it seems leer, long lost art
When shit hit the market, music fans ate it up
Corporations noticed the shit and they wanna make a buck
When shit is marketed, the artistry diminishes
They have to spread the shit across the country to the businesses
For more leverage and the advertising rights
To keep the rigid, all position, it's a vicious cycle
The only thing that suffers is the music quality
Honestly, but provides jobs to help out the economy
The most important thing should be the culture
But the vultures wanna leech off the trends
So follow me

[Gumz:]
Since when did Hip-Hop become about selling shit?
Selling kicks, selling clothes, selling drinks, selling souls
Videos hoes and them weak ass flows
It's like anything for celebrity, they need to be known
Flown around the country, just another cheap ass clone
Spit a poem as I hear another pop song
Someone please explain that shit to me 'cause I don't get it I think it's estrogen, they all kinda feminem, but whateva
It's just me, I like that hard-core shit
Stick-up a middle finger, f*ck the world music
'Cause lyricism, is a dying breed, we need to bring it back
And I'm just tryna plant a seed with my raps
Can't you see I'm suffering for my cause?
What's the cause? f*ck the money
I just want the f*cking crowd to applaud
Is you doubting me dawg? You better bow to the floor
'Cause I'm the realest mothaf*cka that was ever born

[Versatile:]
Yo, yo, it's the degree that made the piggy fatter
The ladder, demonic seeds that make a biggie platter
And shatter part of the soul of Hip-Hop
They lack the sense of history
Like spitting a sixteen with a beat-box in a battle rap circle
And paying respect, and a gold chain to the victor
Blistering lyrics of fury that's out to bury
Nowadays it's more that of a haze, a cloud around a proud
A hole inside the souls of these merciless hoes out for gold
And hoping a blood, well they can blow me
And hopefully they see that it's not to be
Eventually the cycle comes around and bites you
Despite the record sale, the heckler's hail
And love & war if you can juggle both you will prevail
So that's my testament to the ones who made it from the slums
I represent them, first and foremost
The music movement, something you can groove to
This pertains the rooster that once made the Hip-Hop
That you hear today, that simply sinking, in the beginning 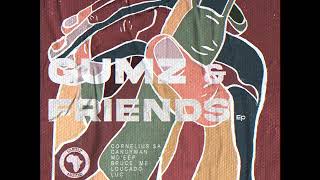 check amazon for In The Beginning mp3 download
these lyrics are submitted by kaan
browse other artists under G:G2G3G4G5
Record Label(s): 2020 Gumz Muzic
Official lyrics by