The Man Who Could Be King Lyrics

The Man Who Could Be King Lyrics

[VERSE 1]
Straight-jacket rap for the lesser
You ain't sick, you just under pressure
I know the feeling, but flows need healing
I brought holistic health in the stealth
Form of a rhyme that you felt
Man listen, I'm in the pole position, on-call physician
Ballin on a mission to get y'all to listen
That all, until you're due I'm a pioneer to proof
Until it's customary that you're tryin to hear the truth
The truth meaning (Grand) the truth meaning (Agent)
The truth meaning the most amazin
Blind-side collision to hit rap ever
If you wanna live through this, then build an ark yo, this is bad waether
Welcome to the Grand Age
Clear the stage, I'm original AND paid
It's man-made, but it's God-like
I be the image of perfection when I rhyme right
Concernin me only with the learning tree
Now you can hang from it or chop it down, but either way it's murder, see
How you can afford to
The brutal truth that I brought through
To support, not abort you, forge you to help you
Before you felt me, I felt you
Achin for a good song
On some monk shit - hoods on
Prayin for a real rapper to get put on
Well, here I am and here goes nothin
The neighborhood ain't get no more good after mine introduction
Man, I don't give a f*ck, I don't really
You can quote that from the Pope of North Philly
Only to my nature do I credit successors
I'm one of the few who the buck blesses
And I suggestes you get right with the Lord
Get your mics and your cords
I'm the new bandwagon, all aboard [CHORUS]

[VERSE 2]
Now what the f*ck was you thinkin, huh?
Whatever it was, you wasn't eatin it and sleepin it
You wasn't deep in it
When jokers see a real rapper they get real humble
I'm like the Furious 5 rolled into one rumble
For recognition bless the mission, it's on
Me and the mic is Twin Hpye, we did it 'to the crowd'
Without publicity stunt the first
It's like mad other ways to make the news
If I want, I'm blessed with the curse
I play the hermit with the gun permit
That's a certified word to the media vermin
It's a thin line between yours and mine
You write articles, I birth rhymes
Don't go sniffin around, I'm not coke
I'm chemistry, I make ?Tone Poke poke?
Tape recorder invader, black male Sinead O'Connor
James Bond'll be the white Grand Agent, honor
The monarch cup when you taste it
Treat it like the East, face it
It's the truth, I'm the roof on fire
The sixth minister got to get on
The hell Run and DMC raised, born to sit on
Thrones and take microphones where they never been
To middleground, the worst and the best of men
I mean, what's a sword without two edges, after all
Look how many knew the legends, but they had to fall
For this to be my era, my epic
Tale of a journey from the feared to respected
Revered for the records that I wrote along the path
Here's a song you can have
I'm not one for small talk, that's a false start
Like the no-rap workday offends and irks me
Yo, I never was a regular dude
Just a Agent and Grand is my secular mood
Yo, yo, I never was a regular dude
Just a Agent and Grand is my secular mood 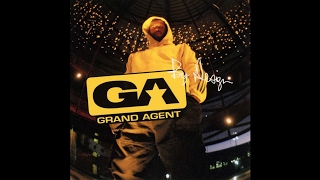 check amazon for The Man Who Could Be King mp3 download
these lyrics are submitted by kaan
browse other artists under G:G2G3G4G5
Record Label(s): 2004 Groove Attack Productions
Official lyrics by