We Can't Be Stopped Lyrics

We Can't Be Stopped Lyrics

Ain't that the pot calling the kettle black

You scream obscenity, but it's publicity
You want hoes so don't act like you don't know
Better f*ck with somebody else before you get popped
Cause we can't be stopped

Bitches get raped, niggas get murdered
Adults f*ckin kids in numbers unheard of
It's on the news every hour
Why can't I talk about it? Everybody seem to be after us
Even the manufacturers
Wouldn't press our disc, you know it wasn't fair
f*ck everybody who work there

No radio, talkshow, or magazine were we in
And we still in the top 10
You can't beat that with a bat

Huh, hammer can't touch that
We from the muhaf*ckin south
Now what was that bullshit about?
That we had to be from cali or new york
Anybody can make it that got heart
Trenchcoats and gangster hats got my back
Any nigga around me got to pack 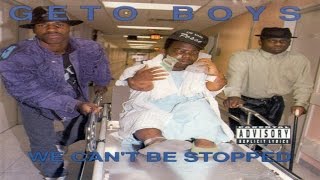