[Scarface:]
These busted ass whores are going crazy
You might as well take up plugs before you make babies
And watch their motherf*cking brains, stupid
And take the rep for the murder you did, you son of a bitch
Cause killing babies ain't gank
Cause your mamma would've flushed your ass down her ass crack
You dump ass whores with no hope for it
Killing babies ain't shit, you're on work for it
They're just trying to wipe her ass out
Cause the niggaz be the ones with their bellies all poked out
And even like to be the desolate by another
You need to pass me a gat, and let me kill some of you motherf*ckers
That's why I'm clear with [? ] niggaz
But this world would be f*cked if it was ran by you stupid bitches
At least give the kids a chance
And if you're going unprotected, keep your p*ssy in your panties
Cause you whores will get the Guillotine
If I would adjust for one of you bitches killing off the unseen

[Bushwick Bill:]
What the f*ck is this protesting?
Legalizing killing babies and shit with no question
Police beating up the freeze cutie
Cause they were praying for the unseen dead bodies
And us niggaz ain't playing that game, bitch
f*ck George Bush, f*ck the court that laying shit
And While I'm at him f*ck way too
Little murdered more innocents cause they cooperated bitch you
Get the dick out of your mouth
And wake up because you're sending these kids to the slaughter house
Instead of sending out niggaz to the meets cutter
You need to send some of these gay motherf*ckers
Ugh, now listen to me ladies: Howcome you're killing them?
But don't pity your little babies
Now, think about that!
They bring your ass some blood wrapped up in a paper sack
Wake up from this motherf*cking dream [Scarface:] And Do what?
And Stop killing the unseen

[Big Mike:]
Prat got pregnant, now she is off to the bathroom
To get the baby socked out of her ass with the vaccum
Label her killer, hide and induct her ass doing in
Shouldn't had your ass out screwing, bitch
Unprotected, getting that sperm injected
Now, you wanna cry cause you're pregnant!
They need to pass the bill
To stop all these babies getting killed
PBs getting pregnant fudge thrill
But they won't stop it
Cause everybody is in it for a profit
Politicians looking at thier pockets
And this shit is sissiness
People getting whipped due this baby killing business
We need to get a grip and chill
And stop sending our unseen to the killing field

[Interlude: Scarface]
Ugh, and you know what Big Mike?
We gotta talk about... these niggaz who, you know...
Let these girls go through this shit though, right? !
You know what I'm saying?
Now, break that shit off

[Scarface:]
f*ck her then forgot her, get her right but then you'll quit her
Told her have an abortion or you ain't getting back with her

[Big Mike:]
Another baby dying, another bitch crying
Another nigga lying when he needs to be frying

[Scarface:]
For going in the murder, he never meant to hurt her
But now she had the baby, all he did was desert her

[Big Mike:]
Xed her out, kicked her to the curb and dumped her
Dumb motherf*cker, ain't you heard of a rubber
And if not a rubber, respite the bulleting
Nigga; wake up and stop killing the unseen 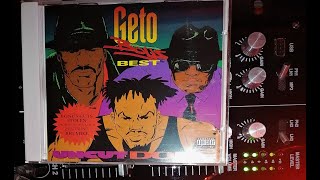 check amazon for The Unseen mp3 download
these lyrics are submitted by kaan
browse other artists under G:G2G3G4G5
Songwriter(s): unknown
Record Label(s): 1992 Rap A Lot
Official lyrics by