[ verse 1: scarface ]
I started small time, dope game, cocaine
Pushin rocks on the block, I'm never broke, mayn
Sportin jewelry and the shit that came with rollin hard
You try to school me, you'll get f*cked up with no regard
Boy, don't test me, cause I'm tired of teachin lessons
So muthaf*ck you and that bullshit that you're stressin
Cause it ain't nothin but the money flow in this camp
And if you f*ck me, you'll forever wear a stamp
So watch your back and prepare for the hitman
Life of the black, and the ak won't take no shit, and
You'll be bumped off, bucked off, no trace
On the for realer, my nigga, just call me scarface

[ verse 2: scarface ]
I'm in the south park, night falls, over the streets
It's gettin dark, bill calls, he's been beat
Round up the posse, y'all, and bring the heat
And when it's over, all I want is bloody meat
Boy done f*ckin with me, real man, and I done told him
So let's just step out on the block and pd-roll him
Load up the uzis, turn the village into a warzone
Make the hit, break quick, leave your cars on
Nobody crosses me, especially in this dope game
So raise up off of me, I show em I don't joke, mayn
Little bill, grab your piece, pick em out
Battle y'all in the street, let's put some head out
Caught my ride, hit the fry, and I step calm
Open fire like a lunatic from vietnam
Bullets fled to the head, bodies bled
Left for dead, I pumped these bitches full of led
Yo, they don't understand me, the yo, brad, bwoy
f*ck that, say goodbye to the bad guy
I shot my gun in the air as I left the place
You'll ask me why, but I don't care, just call me scarface

[ verse 3: scarface ]
Later on, all alone, sat around the house kickin it
My girl came home, I told her shit had been
Real f*cked up, so girl, don't push me
She pulled her skirt up, and said, "he could need some p*ssy"
I just sat back, my legs started shakin
Now here's another stupid bitch that I be breakin
I grabbed the slimmy by her hand, and lead her upstairs
Threw her down on the bed, and she said, "f*ck, yeah!"
I opened up her legs, prepared her for the stabbin Like mike tyson in a brawl, boy, I was jabbin
The bitch was sweatin, but I guess she wasn't bothered
Cause all she said was, "f*ck me harder, f*ck me harder!"
I started bangin, I was bangin, dick was numbin
She wasn't hangin, she was singin, "brad, I'm comin!"
Up and down, side to side, perfect timin
I started stickin with the quickness, we were grindin
I was just about to nut, she got on top of me
I heard a (*shot*) now what the f*ck? somebody shot at me
I took a look, the girl was cooked, her head exploded
Reached for the uzi at my foot, and I unloaded
Straight out the window I could hear the soldiers' footsteps
I'm a taker, not a faker, I ain't been took yet
So many hunters, dyin faces to the concrete
Although you try to take me out, you die in one beat
Of the heart, boy, how dare you suck on me?
And i'ma teach you and your boys not to f*ck with me
Rolled out the backdoor, lookin for his bossman
I'll watch him bleedin, pour his blood in a saucepan
He's in his cadillac, starin at my frontdoor
I stood behind him, pulled my gun, said, "what you front for? "
He says, "i'm sorry, ak, don't kill me, I was jokin, griff"
That's why your boys are on my balcony and they're frozen stiff
The boy was shocked, then pulled up cops, he looked at me said, "you're a goner
Cause you shot and killed the boys who worked my corner"
Pulled back the hammer, put my gun up almost point blank
Shattered his dome, reached in the pocket, took the boy's bank
Got out the cadillac, the copper, he said, "stop it, freeze!"
I aim my pistol for his stomach, instead I pop his knees
Fell to the floor, he looked at me and he said, "akshun, please!"
I put my gun between his eyes, said, "don't breathe"
He took a breath, and he knew he'd breathe his last breath
That's 20 soldiers and copper, 21 shot to death
I had to leave everything I'd ever worked for
But best believe, I won't get sentenced for a drug war
But maybe one day in the future I can come back
But until then, I'm goin home, where I'm from, black
Nobody knows my name, they'll only know this face
And ask my posse, they say, "we call him scarface"

Hey conjo, mayn, listen to me, mayn
Now that we got texas fiendin, mayn
It's time to make the whole f*ckin world start geekin
We expand across the whole muthaf*ckin world, mayn
And we get the dope out there, mayn
We f*ck em up!

And you muthaf*ckas thought I wasn't gonna make a comeback, mayn
I'm gonna tell you somethin, mayn
I'm comin back, mayn
Geto boys
1990
And if you ain't down with the geto program, then f*ck you, mayn
Explain lyrics
Correct lyrics 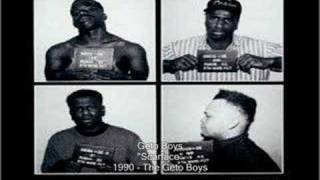