Killa, you're face to face with Scarface
G to the E to the T O

Now here it comes, motherf*ckers die hard 'til the end
(Boom)
Mr. Scarface, not your ordinary dope man
On the for reala, my nigga, I'm a born killa
Let my nuts hanging out, give a f*ck if ya bigger

'Cause I'm that nigga who gets ass rolling ten deep
And shove this shoe up in your shit far as ten feet
Creep by creep 'cause I'm in this shit deep
Never ever caught slipping, bitch 'cause I don't sleep

And if I sleep, the kid gets beat and that's bullshit
'Cause I'm still a lunatic
Body snatcher, Peter Roll capture
Killer coming atcha, niggero subtracter

It ain't a goddamn thing being took
From the bad boys of Houston, so go ahead and dial a crook
And watch some niggas spit the game cool
Ran back and brace yourself, nigga 'cause here it comes, fool

Bang bang bang, motherf*ckers, lay it down
Prat tat tat, the Peterman is in the house
And I'm about to spray it down
Letting niggas hand fit my gat, I gots to grab it
Smoking motherf*ckers is a habit

I'm on a mission, opposition get tore up from the floor up Kicking the type of gangsta shit that make ya throw up
G plus E plus T plus O
Geto Boys run shit in '93 but you don't hear me though

Huh, breaking niggas off who bother to
f*ck around with techs, thinking we ain't nothing but barbecue
So fool, get your ass on
Before the Peterman in the house, getting his blast on

Sending niggas smooth to the concrete
Making mo' motherf*cking deal then a swap meet
The C O N V I C T S is hitting niggas where it hurt
Kicking up dirt down in Texas, so here it comes, fool

Well, what do you know, it's that nigga named Bushwick
Back again still dropping the Bs on a punk bitch
Kicking that G shit ever so clear
5th Ward steady coming hard every f*cking year

B U S H W I C K blowing niggas away
Doing this type of shit every motherf*cking day
Never waste another niggas time
Got my 9, getting paid, kicking these motherf*cking dope rhymes

So if it comes down to it, I might gatcha
Dead in that motherf*cking dump, give that ass a fracture
'Cause I ain't that nigga you wanna f*ck with
Bushwick Bill, the nigga named Chuckwick
So here it comes, fool 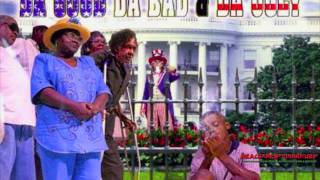