I hopped on the train and cold clocked a chick
Who looked good as hell but she appeared to be sick
I would say she had to look as if she swallowed a worm
Then again she could've swallowed several ounces of sperm
Giving me the eye as if I was the right antidote
So I decided to swing a smooth episode
While the train stopped at Grand Central turn
Before I knew her name I was massaging her perm
I said, "My you look drunk, have you been drinkin alcohol?"
You got a fever here's an Extra Strength Tylenol
She said, "Great a comedian, comic"
She leaned on me, I said, "Please don't vomit!"
She said, "I'm not I just need some rest"
I said, "A few more stops, The Genius house is best"
Got to my rest, her whole attitude change
But deep inside, she seemed sexually strange
Went in the room and she flopped on the bed
With wild-ass thoughts inside her headachish head
I went in the kitchen to prepare some food
When I came back in she was completely nude
I know it sounds weak but believe it or not
That the fever in her head ran straight to her twat
She was burning! Burning up out
It took more, than firemen, to put that out
And yo, I was hard, just as hard as a rock
That I can hit a home run, with my cock
She said, "Let me show you what we do uptown
I huff and I puff till I blow your balls down"
Wild as a wolf from off Wilderness Ave
She said, "My what a great big ahhh! you have"
I started dripping and dripping in consecutive terms
I know we must save water but that does not include sperm Did you ever know a girlie who just loves to switch
From a Part Time Lover to a Part Time Bitch
While she's loving part time, she's riding on mine
She says, "I love you long as you keep making me feel fine!"
In her behind, vagina, or heated climax
That I would sew, control, finger then wax
Now she's swingin so low yo she flex like wrecks
'cause she can set records on oral sex
There's no lie what I said, she lives in the bed
If she got married, she'd be a worn out newlywed
And if she heard these words yo she would not cry
Because sperm, the only damn tears in her eye
Her drip-drop face is the one I painted
Just stared in her eyes while she damn near fainted
As she choked, goggled, then spit up
'cause cream, was flowing, all over her cup
On the bathroom floor 'cause her parents were home
And I just could-n't tolerate her moans and groans
"Genius, oh Genius, oh rock me so hard!
'cause I don't want to stop, I love you God!"
But there's one thing she could never erase
That the thing she really wanted just sprayed in her face
So she regret, she ever swung low before
But this little hot bitch comes swingin for more
It used to be one, now it's five fingers of death
That rips her insides, as she gasp for breath
To say, "I love you! I love you! Forever so!
I'm getting hot getting hot let me blow let me blow"
What she thought was love, turned out to be lust
That made her live by the laws, in sex we trust
Explain lyrics
Correct lyrics 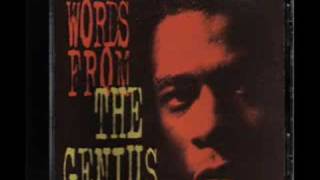