Yo, let's, talk about it what
Sheek'll throw the fiend on a nigga guarantee he won't
walk up out it
("DJ Ski!") With my nickel plated; kinda old
But the muzzle that I use'll make this motherf*cker
updated
Puh, nigga please; if a nigga had your son
and had him lookin down the gun you wouldn't need to
squeeze
Uh uh I don't know, don't wanna hear
about the money that you had, or what you did a long
time ago
Yo yo the hood is mine; I don't gotta sell a lot
I just live off more points than the porcupines
Fuh-fuh feel me cousin?
Sheek been a problem before this D-Block shit started
buzzin
Some'll say no he wasn't, he turned sick
With that women in your family can suck my dick
And I been red hot e'ry since I ain't sayin I'm the best muh'f*cker, I'm just workin
with {?}

[The Game]
Nigga let's (Nu Jersey) talk about it what
Banks say he bustin his gun, but I never seen a spark
come out it
Now now who's the wanksta?
At Hot 97 you called police then called for peace
D-d-dear Mr. Interscope, I'll put you in a scope
Burst rounds, you the first down like a {?}
Eh eh nigga choke, now the talk of New York
is Yayo die with 50's dick in his throat
G-G-G-shit a joke; Olivia's a man
And hot damn there's a f*ckin lump in his throat
Spit brrrap in my sight
If I don't catch you, I'ma catch James Cruz or Chris
Lighty
Now that that that's for snitchin
You don't run through Queens, you call 911 or Supreme
I'll put you on to Game, pull a gun on your team
This for Compton, that's for Queens, cause 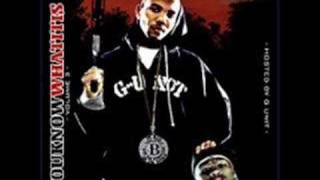 check amazon for Street Muzik mp3 download
these lyrics are submitted by kaan
browse other artists under G:G2G3G4G5