[The Game]
I got shit on my chest, I must confess
Last night I was the nigga that shot up your projects
Now I'm back in the hood, with rocks in the Pyrex
Tan khakis and them Nike Airs with the dyed checks
I was forced to live this life, forced to bust my chrome
My pops left me in a foster home
I felt abandoned like Quik now that Mausberg gone
So I don't hop in the SS without the Mossberg homes
I've been rappin for a year and a half, my life is real
Put the gun in his mouth, he gon' bite the steel
Come to Compton, I got stripes for real
Before Dre, before the ice, before the deal - I was almost killed
Like 'Pac before the Death Row deal
I got shot over two pounds of weed, still ain't found them niggaz
But karma come quicker for a nigga on the other side of the gun
That's somethin I gotta teach my son

[The Game]
I heard they got Bloods in New York now
Red rags in Uptown Harlem now, I need that love
Front court at the Knicks game, new chick, French name
New car, new house, and sometimes friends change
And you don't need that love, when you G's like us And your Jesus piece is sim-u-lar to Biggie's
And your life story is sim-u-lar to 50's
First they hate you, then they love you, then they hate you again
What the f*ck do it take for a gangsta to win?
No mics, no +Unsigned Hype+, nigga *f*ck* The Source
Plus them awards I don't need
And them niggaz breathin the same air as me, actin like they don't bleed
We don't drive the same speed, this a Continental T
That's a case of Armadale, this a continental suite
So I'ma drown in my own sorrows
Live life, f*ck tomorrow, nigga cause reality is

[The Game]
I was gassed up, Murder Inc., Roc-A-Fella passed up
Sat in Daddy's House with Black Rob and Lou and asked Puff
Now The Game set in stone, the Frank Muniz set in stones
Dre cut me a check, I'm gone
Tryin to be the king of the streets, niggaz'll wet your throne
But I got nieces to feed, two coasts to please
So I roam through the city like the ghost of E
Gotta put Compton back where it's 'sposed to be
Nuttin between all my niggaz that's close to me
In the streets with two fellas packin toast for me
I'm 'posed to be, got all the critics watchin my pivot
On my block in the Coupe readin kites from prison
I got niggaz doin life in prison
All my fallen soldiers is one of the reasons we pour out liquor
So this song is for Ms. Wallace, Afeni Shakur
And all the mothers of dead sons that went out in the war 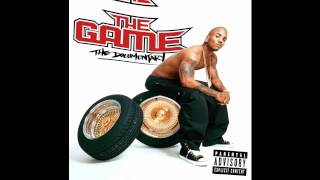