[The Game]
Lace my Air Ones up, put my gun up
I don't need that I'm riding wit Dre
Who don't love us, every hood throwin they dubs up
Who the f*ck yall thought was comin after Young Buck
hip hops worst nightmare, Mr. Gangsta Rap is back in black nike airs
You want war, we can settle it right here
I got a squad, E-V-E and Busta Rhymes yeah
Or you could give me ya bitch, her with the light hair
Sit her next to these yellow bottles, tea right there
Matter fact I'll take you in the back
you in the hat, and you in the blue and the black
Lets have a gangsta party
Somebody lean over and tell Banks to order another case of fortys
Yo Doc give them a coke with that, wake up the west coast is back

[Game + (Snoop Dogg)]
Like Dre did, I created a buzz without a single like N.W.A. did
From the hood -liquor- store to the state pen
This is gin and juice
the doc made the club R.O.C. without timbaland boots
First nigga to put drolex on a bentley coupe
You wanna piimp? I perm my shit up like snoop (Westside)
Chronic 2005 motherf*cker, put the purple in the dutch
"Let it Burn" like Usher giirl
Drop down, do the eagle, f*ck that
Real niggaz just pull up they pants and lean back giirl
Make 50 spill his cris, he'll call you a bitch
I'ma call you and hit , you can ya girlfriend, we can make it a flick
I got the lollipop if you wanna lick
Or you can take a ride on the magic stick

[Game]
Put 25's on the hummer, why not
I'ma be here for the next 10 summers
Drop me in the 4th quarter I'm f*ckin up they money
I don't need sound scan I'm doin my own numbers
When that impala bounce you can see the chrome under
I got em' in every color yea I'm a known stunner
When I hit a switch I get higher than long jumpers
low ridin with a hood rat or a grown woman
And I'll do anything but I won't f*ck Mariah
Even if she had Ashanti butt naked in bed
cause she got a forehead just like Tyra
I can say what the f*ck I want, you thought Dre retired
Left me in 6-4 his Dayton wires
These niggaz is a waste of rhymin, Doc got somthing to say be quiet

[Dr. Dre]
Look out for Detox 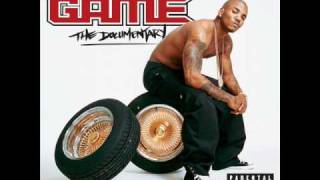