Painting On The Glitz Lyrics

Painting On The Glitz Lyrics


Ooh
(And fly the gauze)
Ooh

Sharpening the wits
Powdering the perked noses
Summoning the will, the skill, the thrill
Taking up the opening poses, so eyes and teeth, girls
Don't show them what's underneath, girls
Get ready to go
For the biz that is called "show"

[Verse 1]
It's a funny old life when you look at it, really, this showbiz lark
The way every evening the lethargy leaves you when it gets dark
In spite of the fact that last week I had flu, and I'm still not well
And last night I went out on the town and got drunk and I feel like hell
And I slept with one of the crew, but can I remember who?
I'm sure he had a tattoo
As the curtain goes up, I think to myself: "Did I feed the cat?"
I succumb to the usual panic attack as my thighs are fat
The orchestra starts and I blink in the glare of the dazzling lights
In a moment of horror I see that I've gone on in laddered tights
My mother is in and I know that she'll tell me my costume's vile As usual the woman is late, that's her coming down the aisle
But what the hell, this is showbiz darling, smile

[Verse 2]
Painting on the glitz
Feeling not the least nervous
Think about the way I play today
Really must improve my service, says my instructor
Quite fancy that new conductor
Belting out the hits
Going out to eat later
Everybody goes to pose at Joe's
Might attract that handsome waiter, I bet he's gay though
That's always the way, so hey-ho
What can a girl do?
Oh my god, that was my cue!
Oops!

Get ready to go
For the biz that is called-

Showbiz, schmobiz!
People will do anything nowadays to get into it
Yup...anything
Explain lyrics
Correct lyrics 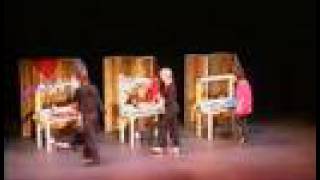 check amazon for Painting On The Glitz mp3 download
these lyrics are submitted by itunes3
browse other artists under F:F2F3F4F5F6
Record Label(s): 1997 Exallshow Ltd
Official lyrics by