Put Your Hands Together Lyrics

Put Your Hands Together Lyrics


*piano playing for 1:02 before the beginning of the main song*

This is for thousands of people who came
A show from road to road you're entertained
I don't even have to say my name
Cause when the place is ripped in half, I'm to blame
Masses of posses packed up schemin
Ladies lovely and keep on screamin
Go rakim, go rakim, go
It won't be long then it's on with the show
I'm late, so hit the brakes and park the benzito
Double oh seven, incognito
Sneak in the back door, lookin for the stage
When I get on you react in a rage
People from side to side and front to back
Won't dance, if the mc's wack
The crowd go psycho even if I don't move
Some like the groove cause I'm so smooth
Then somethin happens, feet start tappin
You can't hold back when rakim's rappin
The man you've been waitin for, rougher than ever
Ladies and gentlemen, put your hands together

I create em, take em, shake em, then make em clap to this
Most of you rappers, can't even rap to this
I made it faster, you tried to master
Syncopated styles, words flowin after
Measures of metaphor definitions of more than one
Take it both ways, I'll be here when you're done
Remember as the rhyme goes on it's rougher
Soon as I stop, you had enough of
Followin footsteps, you better turn back soon
Sucker mc's suck rhymes like vacuums
The style remains the same, the words is changed
Bitten, rewritten, recited and rearranged
Sing along if your tongue is strong, it gets sore
Sing when I'm gone and it'll break your jaw
Wisdom flows so swift, I'm asiatic
Is it a gift, or automatic
Static, I don't cling
I got a tip of my own and I don't sing
Don't understand, here's an example
And why mc's and dj's sample Cause we don't have a band, it's just my voice and his hands
That's what hip-hop was, it still stands
The records we use are from mom's and pop's collection
Find a break from a dope selection
And go to the store, then buy one more
So my dj can mix cause that's what his hands are for
Years later hip-hop got contracts
The chance to put actual facts on wax
A mind's the coach, the physical form's the team
The top's the destination, I'm the cream
And still I rise with somethin pumpin and somethin clever
Ladies and gentlemen, put your hands together

Now who's the man with the masterplan?
With stacks of verbal attacks so clap your hands
Rhyme written in graffiti xeroxed on blueprints
Students influenced are now a nuisance
You couldn't fight it, you had to clap to this
You got excited, you almost snapped your wrist
The rhymes was written for the crowd's enjoyment
When I'm with this you can't toy with
The def jam juicer rough rhyme producer
Loads of lyrics get you loose, then looser
The man so smooth and world so rough
Eric is throwin and sewin rippin restitchin the cuts
Microphone your majesty, no one's bad as me
Seems the tragedy, rakim had to be
Thinkin of some def view of a video
Visions are vicious, and I'll let the city know
Whoever's frontin they know, nothin to say though
So lay low, musical forms are kickin' like kato
Don't get near it, hard as you ever hear it
I know it's fearified, but don't fear it
And try to predict which rhyme you can kick
You're quick to pick your best, for the mic is lit
Instead of goin with the flow like you're supposed to go
And enjoy the show and yo, put your hands together 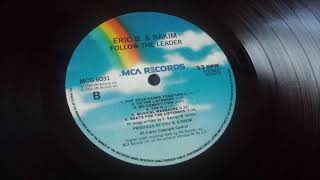