As The Rhyme Goes On Lyrics

As The Rhyme Goes On Lyrics

You're physically in this with me but how could you tell
If it's meant to be hip-hop, if you're not mentally as well
Ready to absorb the rhyme that I just poured
Into the mic and so unite and this won't be so bored

If you just keep kickin' listen to the mix
And think you'll sink into the rhyme like quicksand
Holds and controls you 'til I leave
You fall deeper in the style, it's hard to breathe

The only time I stop is when somebody drop and then
Bring 'em to the front 'cause my rhymes' the oxygen
Then wave your hands, when you're ready, I'll send you
Into your favorite dance, so let the rhyme continue

And so on and I'ma go on simultaneously
Even if I stop, the rhyme remains to be
Rising to the top and I came to drop it
Catch it and quiz, it is my topic

The five boroughs react and all the islands attract
And every state can't wait, so they attack
Off a spot on the floor squeeze in 'cause it's packed
It'll be more room if MC's play the back

I'm the R the A to the K I M
If I wasn't, then why would I say, I am
The microphone fiend if I was a fake
Whoever said, it's just buggin' off the rhymes I make

I had you biting your tongue for what I brung and recite
Sung it on stage some said it don't sound like
The voice on the record, I see what you mean Because the system was wack, so I had to scream

So just give me a mic if it's loud, I'll blow it
If not, into the crowd I'll throw it
Pull out my cordless mic and entertain you, well
Before I let go I'ma spark your brain cells

I took time to write, tonight I will recite
So poetically inclined when the mic is held tight
Rhymes start flowin' kisses are blowin'
MC's are knowin' that's why they're goin'

Home to tell a friend when the party ends
Yo, man you know Rakim? That brother struck again
'Cause mic by mic and stage by stage
Tape by tape and page by page

When the crowd is moving I compete with the mix
The rougher the cuts, the rougher the rhyme gets
Deeper and deeper, I hope you understand it
I made it up myself and I planned it

For other MC's who waste time
Writing jokes, riddles, and maybe a rhyme
I cross my arms and I was waiting but I was hating
The rappers on the microphone was fronting, just faking

They wasn't breakin', which means I was achin'
To get up on the microphone and then start takin'
Control of the mic, uptight when I grabbed it
So hug the speaker, your ear's a magnet

Attracted to a freestyle put in effect
You listen to my man while you're sippin' Moet
So Eric, pick up the needle, yeah, put it in the middle, alright
Give me a scratch, turn my Mic up a little

I want you to hear this perfectly clear
Catch, what I'm sayin', you get the idea
I hope you knowledge the beginning 'cause I'm finished this song
The rhyme gets rougher as the rhyme flows on 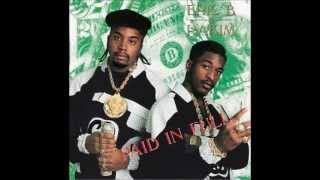