What Will Be Has Been! Lyrics

What Will Be Has Been! Lyrics


Caught within the scenes of time the warrior wakes again to find
A prologue set by twilight rays through the breaking dawn
A dawn unlike no other dawn as backdrop to proscenium
The cursed cycle starts anew Himself "cast" down as lead
On his feet a legend and on his throne a lord
Bathed in crimson glory so the centuries have foretold
The advent of the day when pale untruths shall be no more
Usurping the hands of Fate
Now to leave the dismal place and setting eastward the course he takes
Skirts alongside the stagnant pond whose waters swirl with taint
[For] Within the fetid mists and foul decay which on the natatorium lay
The source of evils yet to be lie in wait
Further east and all the while
His grand design is planned
Obscuration of the light [when] the balance is destroyed
Ushering the epoch of the splendorous Unlight
"…And so I set forth my mind resolute and might unchecked to rend my will upon the world. With centuries to prepare for the final battle and the glory that awaits in every drop of life…" Lust forever, lust for life,
A lust Unmatched in human kind
Fueled by such desires
As may mold flesh to my want
"Beauty as Might, and Might as Right"
So seduced the lord
From wanton whores the bloodsons came
In legion issued forth
Cursed for all eternity
As seen by another also condemned
Before the final blow is dealt
What will be has been!
…Too late the error revealed. The unparalleled pride of the ancient one now splintered through all the ages. With glory for one the ideal is lost, as is the war…
Gone is the path to victory besmeared by consanguine wars
Arrogance in the sons that I was fated to ignore
For a greater lust that by design will never sate
An all-consuming hunger unified by blackened hate
A pause to look upon the world before I am reborn
…A brilliant flash of light and the One Great Truth revealed
The pain of clarity just seconds before oblivion and the slate is again wiped clean
Where one time ends, another begins
Caught within the scenes of Time… 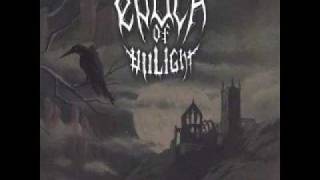 check amazon for What Will Be Has Been! mp3 download
browse other artists under E:E2E3E4E5E6