Countless years between the fated crossings
From the mighty threshold into time
Under the ice-blue glare of a star-filled night
Once again I had arrived...

Another point of transition, another's grand design
The endless quest of a darker mind
A skewed symbiotic voyage through the all
The legatee of a night much maligned

Unbound I rise
Aleph-null was the lie
Far beyond the rubicon
In league with the Unlight!

Fetid crests of purulent seas flowing over all
The cleansing streams transecting time
Guided through the propylaeum of the lemniscate
Supposition's proof in drowning cries!

Unbound I rise
Aleph-null was the lie
Far beyond the rubicon
In league with the Unlight!

As the external projection of the Will, I will embody the insurrection into time
With the cosmic singularity well within grasp, I pluck from the churning vortex a view into The blinding splendor of the multileveled universe
The linear continuum of uncountable infinities!

A point between all other points and nowhere in between,
With malice of forethought I pass through time unseen.
Where others failed before I was successful in my task,
And so the ignis fatuus fades and I return to

The blinding splendor of the multileveled universe
The linear continuum of uncountable infinities!

With malice of forethought
I pass through time un

"Pushed to find a way
To sate a higher lust
So through night I ride!"

"My burden borne by craft of hand
And strength of will
Under Starside skies!"

Long ago the foul stench rose, yet we remain...
The few to whom the night truly belongs – and by right lay claim.

The preternatural rush
Of a frenzied kill 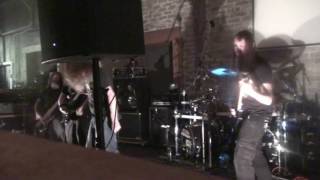 check amazon for The Continuum Hypothesis mp3 download
these lyrics are submitted by kaan
browse other artists under E:E2E3E4E5E6
Record Label(s): 2005 The End Records
Official lyrics by