Yo yo, E, how's the kite
Rippin' the mic, hardcore, keepin' it tight
Sho nuff, roll thick, come, my squad be tough
And I take no shit cuz I had enough
Who makes the dough, don't act like y'all don't know
Got things y'all cats never seen before
Ask your hoe, the E go cash to blow
Get it, spend it, with it, fast or slow
Where my dogs at *growls*, hold it down
At the 5-5-9 of the underground (What, what)
Hate me I don't care
Cuz I been figured out that life ain't fair
So I'm doin' it on my own
If I need some help, I'll call Tyrone (Say word, word)
Def Squad, makin' ends
Next year comes 'round, gon' do it again

Yo, when the sun goes down here comes the moon
Doc let the wolf out, tear the roof out
Def Squad general bring your whole account
I got it in the couch, we can brawl
I clock the squeal, make your block feel
Like hot mills on your chest when the cock still
You know, wavin' the fo' with big
Do you know when you fall like bowling pins, huh
Yo, let my dog loose *growls* You can't unloose if I came full proof
Worldwide tear, ???
Dope shit, I'm surprised how I do that there
D-O M-O, it's to put the slug nose to your CEO, then blow
If it gets thick, I doubt it
Long as Def Squad be about it, clubs stay crowded

Yo, how come anonymously, I ka-pow
Rock the rough crowd, me, Reggie, Biggie E and the ???
Smokin' in the streets covered by black clouds
Hard to the core, with the pow and the wow
Take it to the streets like a thug sippin' sud
Show 'em some love before they rip up the club
Catalistic, disaster, catastrophic
Superistic, super-charged, MCs at large
Definition of tradition, before description
Make a nigga go broke, can't pay attention, listen
We built this empire on rap alone
When the battle and the war, never get the throne

You're listening to the sounds of WDEF Radio, Def Squad Radio
Where Nasty Nudge, the big mouth
Still in charge and still f*ckin' your man while you bitches ain't around
Y'all niggas ain't ready
Explain lyrics
Correct lyrics 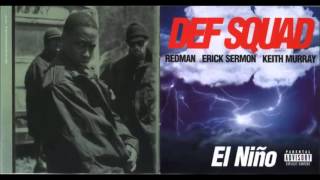