His eyes are fiery, the flame burns within
He wreaks of murder, his mind filled with sin
The sickening stench of blood on his breath
This villainous beast, this angel of death

They hear the noise, the people in the town
They cringe in fear, frightened by the sound
A sacrifice is required to live
Must choose a girl in which they must give

He once was a clergy man
Swore to bring peace to lands
Lustful doings not foreseen
He blames it on Satan's screams
His mind is twisted, schizophrenic freak
Once in his presence, demons dare not speak
His piece of meat must be young and fresh
He loves to feast upon her tender flesh

Now he has risen, holy powers fell
Anti religion, mercenary from hell
The town has fallen, southeast of Wales
In this backwards legend, the evil priest prevails 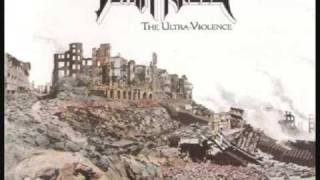