Will the hypocrisy ever cease?
You made the bomb, and made the mistake
Make us fight to cover your idiocy
In this country with it's so-called democracy

We ask why and we get - no reply
Then we ask about or future - we will die
Forget our dreams and go to war - sudden death
The bomb is dropped, it's all over - nothing left

Can't you get it through your head?
You'll make us fight until we're dead
I won't kill my friend or foe
Fight your own war 'cause I won't go

Finance your war with our death
Won't die for my country, screw the U.S.
A country dying, we've got no say You f*ck up, but we're the ones who pay

Won't help the poor or be second best
Either you like it or die like the rest
We all mean nothing to our twisted earth
Why kill one another, what's it all worth?

Use your head, and look what we've got
A future filled with nothing, we are left to rot
From disagreeing to the threat of war
Blow us off the earth, will even up the score

I won't pay the price of fate
To fulfill your lust and hate
When it's all over and it's all been said
You sit pretty, as we lie dead 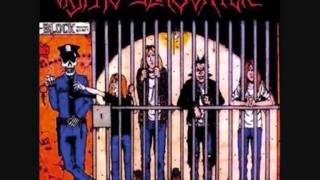