Prisoner of one man's hate
Now facing their final day
Try to reach their wired gate
Who has their god saved?

They storm the gates on hopes to be free Many trampled in the frenzied flee
Many fall as machine guns roar
See yourself, but now as a bloody corpse
Escape for you is nothing but a dream
The bullets rip your flesh as you scream
Your final breath is spent on cursed cries
The tortured lives of Hitler take to the sky

Is violence the way to get a point across?
If you don't get your way, it's your own loss
Don't try to force people to see your way
You shoot people down, someday you'll pay
A large racial barrier, when will it break?
Blacks aren't dumb, whites made the mistake
Like to kill them, but they wouldn't dare
They'll shoot back, what's fair is fair 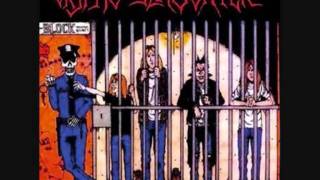