[Chorus: Crucifix]
I can barely breathe
Living in this Paradise Lost
Everything I see around me
Is just this chaos that I've caused

[Verse 1: Crucifix]
My past is a burden behind me I can never take back
With consequences that way way outweigh their weight in crack
Up when it's sunny, about that money
Sittin' on the corner with a fire snow bunny
One hellafied rock, part raw, part dummy
For the first bad junkie that'll come and get it from me
I sack blow, stack dough, trying to stack that status quo
Even though that status don't change a damn thing for the pain I've sold
I'm rippin' and running my mind until my heart is raw
Thinking that once it's calloused I won't feel at all
The pain's so steady… hurt's so heavy
Sittin' on my chest like a two ton Chevy
I'm ready to bust like a New Orleans levy, just wishing' a motherf*cker would kill me already
Don't give a f*ck what your Pops said!
Steady bumpin' at the gums will get you shot dead
Go ahead and lose your temper like a hothead
I'm gonna open up your mind like a pot-head… nuff said
Don't give a f*ck what you've been through
'Cause I done got a couple homies in the pen too
I'll put that dot up on your head like a Hindu
And still kill it with a pistol and a pen too… I sin too
But if the gift I was given and life that I'm living ain't pointing to Heaven 24/7 then what's the point of repenting? Because the only path back to the Paradise Lost is a journey that begins at the foot of the cross

[Chorus: Crucifix]
I can barely breathe
Living in this Paradise Lost
Everything I see around me
Is just this chaos that I've caused

[Verse 2: Cool Breeze]
Now up early in the morning, up in Regency Park
We bout to get this thing crunk before it gets dark
I got fifteen sacks, and two fresh 0's…
Fifteen sacks and two 0's are gonna get sold
About five of them dimes of that mid gon' get blowed
By the time we shut it down my pockets gon' be on swole
When them suckers see these hubbas we jumping' it's gonna explode
When they see that kush we pushin' out front, it's ton' explode
Anybody come around here that's askin' for me
I'm gon' give them suckers that Fila print off my feet
And I better not see that sucker up at Central Station
Man I better not see that sucker passin' the Marta Station
Look here, I'm gonna tell ya right now, I can fight man
Bwoi I hit you one time, you'll be like "Aight man!"
Now if I hit you two times it'll be "Goodnight man!"
Nigga I'll whoop on your ass like the white man

[Chorus: Crucifix]
I can barely breathe
Living in this Paradise Lost
Everything I see around me
Is just this chaos that I've caused 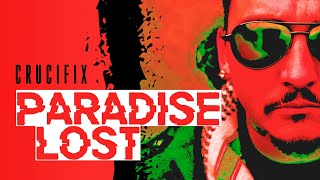