The bastards, what are they playing at?
Don't like the music, don't like the words
Don't like the sentiments
Well keep it for the birds and bees, boys, bastards
Yes that's right, I stepped out of line
What do you want? What do you want?
As long as I play it moderate, that's fine
f**k off runt, f**k off runt
Pick your nose with your ball pen, put your snot in Sounds
Back to your play pen with your street cred minds
You whimper and whine from the pages of the press
Ridicule and criticise those who want to change this mess
There's people our there who are trying to live
People who care, now, what do you give?
So many parasites living off our sweat
So many f**kers in for what they can get
Punk ain't about your standards and your rules
It ain't another product for the suckers and the fools
Your sit behind your typewriters shovelling shit
Rotting in the decadence of your crap lined pit
Waiting for the action, so you can grab a part
But it stinks so bad [where you come from]
Who's going to smell your fart?
"CAN YOU PUT ME ON THE GUESTLIST?
IS THERE ANY FREEBIE DRINK?
I CAN'T WRITE UNLESS I FEEL WELL PISSED"
Piss off, you f**king stink.
Explain lyrics
Correct lyrics 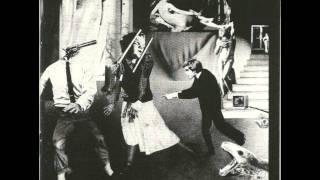