[Buckshot]
A lot of y'all, think you know it all
Want me to fall, but y'all the same niggas at the party on the wall
Askin shorty to dance, do she wanna groove, no chance
She f*ckin wit Buck, I'm on the move, you understand
Stupid, wise up and get intelligent
See that hardcore speakin is irrelevant
Teachin, when I'm on the streets and
When I'm at a show I see my niggas is defeatin
The purpose, no longer am I nervous
I told you, you shittin on me, I'm comin back to blow you
When I do this, don't act like it's a shock to you
If I shock you when you bow down, say true
Now you can say you knew you was f*ckin wit the general
But generally speakin, I didn't even know you
But I knew your kind, I dealt wit the same mind
Saw the same plan, ended at the same time

[Buckshot]
I can't wait to get rid of y'all Captain Crunch niggas on the mic
One hit wonders, scared of the under, I'mma bring the light
To make ya niggas come out of the closet You might have to see me in the party, watch it
I set the flame, see usually the aim is
To burn down the cane field, must remain real
Keep the stainless steel
Bulletproofs the proof that the streets is real
Two shots to the belly, now the body feel ill
I will take ya niggas right above the hill
And everybody got the skill, one spliff
Two, three, four spliffs, and make ya ball out
Everybody call out, it's the black, that make you lay back in the cut
And ask "What the f*ck is that?" nigga chill, relax

[Buckshot]
I bomb first, leavin no time for you to rehearse
When you hear the gunshots, nigga disperse
Shit gets worse if you persist, and tryin to diss, son, imagine this
The vocalist, every time I told you this
You told me that you knew in that I owned you this
What owned you this? My niggas be retaliate
Had to make an example of niggas and demonstrate
How we don't f*ck around wit y'all
We might bring the pound for y'all, bust a round at ya
Police put the shell up in the jar, for the evidence
Kid, ever since I was fifteen, I was liftin
Big clips and magazines, readin them and heatin them
Put them in the bottom for the enemy to plead son shot him
Got him cuz he want to be the talker and the big spender
Until he got hit, bump the fender
Now he's misdemeanor minded, always caught up in some petty shit
Til he got wit BD, now he ready, kid 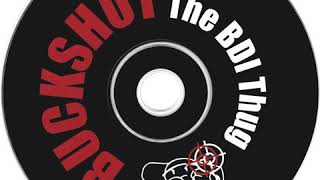