[Buckshot]
Buckshot rip the body apart
Come through wit the lyrical art, follow the spark
I'mma leave the blind thru the dark
Gather up the ganja come aboard the arc
Like Noah, I don't show a nigga he ain't ready for this
Shot the snake and make him venomless, stop the
hissin, this is ridiculous
I'm about to get ready and bomb this shit
Raise the thugs wit the heater in the arm for shit
Marijuana when you drive, feel the fogginess
I'm about to cause a war, a cannibalistic thing
Feel this thing, shit, at night, you hear the bang bang
Buckshot is just doin his thang thang
You can see the glare as chains swing
BD get up in the cypher of a shame game to maintain
Watch me now, follow me now
Boot Camp release the leader and I'm sick now
Comin straight for you

[Buckshot]
BD drop a hit, that make ya forfeit
Black as that shit thatta make ya cough kid
Drip drop gotta get them niggas off of it
Cuz I'm, dangerous, I remain wit this
Never forgettin them original niggas on my list
Hit me one time, hit me two times
Boogie, how could he, he really thought that I was blind
The light at the end of the tunnel, brought me to the surface
No longer nervous, but now my purpose is
To bomb the world wit BCC, travel through my odyssey
It's gotta be me, if it's gotta be
Let the battle begin, nine o'clock on the dot, set the water start
Slaughter the chart then, the sky's darken
Clouds travel to the rhythm of the violin
Calm the savage beast like Leviathan INI, many men, said rasta mon na dred
Chalest instead of the Philly, really, see me, BD
Whenever I speak, I get to the point like a TB
What's the deal, what's the deal?

[Buckshot]
Keep the gun tip by the upper lip
Keep a extra clip, just in case he flip
If I'm high in my ride, then I gotta dip
Quick to losin my composure, but I can't slip
It's been a hard road, and I been walkin this
And did a lot of hustlin to get you off of this
I got a bank roll, grow like fungus
So much money, ya niggas wanna come among us
Live like kings, do our things
But let me tell ya muthaf*ckas what money brings
Niggas schemin on your rides, schemin on your rings
Target every night, just follow the red beam
It's a mission, and the mission is to stay alive
Shit, the streets don't want me to survive
But I gotta strive 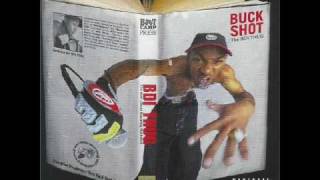