[Brand Nubian trades off rhyming each line]
Yes yes yes
It's a test test test
Now Rule is the town
WHERE WE REST REST REST
If you were wondering
were the ballistics finally in
Once again,
BRAND NUBIAN!
You and your girl came to see the three rock
NOW SHE STAYS
Kick the funky lyrics, throw her down
TO HER PJ'S
Lay her on the floor and do work
IN THREE WAYS
After the party
Guess what?
Aiyyo she's still payin!

[Derek X]
I got this girl a mink sable, in return I got a cable
Her name was Fat Mabel and she brought my kid to table
Ate pasta with this rasta, went out with her sister
Her hands on her chin, thought she was a mister
Went out disco dancing and my feet I made blister
Smacked in the face until I finally I dissed her

[Grand Puba]
Encounter with a stunt, and I'm out for spot fronts
And stunts was on the wiggy, I thought her name was Ziggy
But her name was Lucy and I met her on the deucey
Put me on hold to go in a store to get loosey
(COME ON)

[Lord Jamar]
Aiyyo mack she need to stop it
Now let me kick some flavor since we're building on the topic
cause yo, I knew this girl and her name was Tina
She rested in Medina, never saw eyes greener than hers
But yo there was just one little flaw, the green eyes
I had to penalize, cause they was bought in a store
A synthetic cosmetic, it was pathetic
If they was real, then yo she got the credit
But they wasn't so she doesn't
I like the natural look, so I kicked it to her cousin

[Grand Puba]
Too hot to handle when I was young I used to vandal
Giving girls the comfort like a foot and a sandle
Always help another brother, NEVER running scandals
And if I hit the skids, well I'll just PANHANDLE
Now I'm gettin papes, but stunts gets the vapes
I see it as a joke cause they break when you're broke
I can give a ROAR like an ancient dinosaur (Rrrwwaoorrr!)
Swing a microphone like the great mighty Thor
Puba Maxwell is the mack that's hyphenated
Girls seem to love the way my things are situated
Hump on a bump til them bumps is feelin sore
Take a quick breather then I'm goin back for more!

[Derek (Sadat) X]
I do my thing like B.B. King my microphone is named Lucille
Throw a dip in my hip so they call me extra ill
Making big hits from tidbits, how I make my bread Do some situps, and squat thrusts, to keep a level head
cause I'm WELL BRED, and mannered, I create in my workshop
Stay up late at night until my brain says to stop
Then I quit, wake up in the morning and continue it
I find the same line, and add some more (shit) that's hype
But my stripes, marks me by champ
Check out the bass coming from the power amp
I'm the controller and like Ayatollah
I used to live in Saudi Arabia
I never come out straight out with an answer
Just a yes, or a no, or a maybe I do
but with my crew sometimes I get BLAZED
Jump on the floor and kick a new dance craze
I can read and I've red since the days of ?
If rhymin is fundamental, then light up a spliff
and grab, and not an ounce of flab, is on my body
My mother's part spanish, my father's part yardie
I'm not a junior, try to see me catch a ?
I got yeast to rise straight through the moon

[Lord Jamar]
Girls scope this, like in astrology they knowledge me
That's cause I'm God, but don't look too hard in the sun
cause you might get done
My number's seven, that's SIX PLUS ONE
Now any way you count Lord Jamar will amount to be
a tower, so yo, knowledge my power
As I conclude, to girls I won't be rude
Just verbally feedin em my mental food
I embellish with lyrics, that can't be contested
Serve em straight from my mouth and in your ears they're digested
The rhyme I say, is out of the ordinary
Some say unique I prefer the term EXTRAORDINARY
MC's rhymes are ancient like a dinosaur fossil
They're weak and outdated while my rhymes are collosal
Like a Lamborghini, I look good, and I'm expensive
Plus the power I'm unleashing is just, too intensive
Discombublatin MC's with thin mind percentage
Guys like my rhymes, girls like MY MASCULINITY
When I'm on the mic I say what I feel
I'll never perpetrate cause the God's for real
It's like that (THAT) and at my jams you know you'll never be bored
So just dance and scream, praise the Lord

[Brand Nubian trades off rhyming each line]
We used to be some soloists but now we form TRI-PACK
And if you try to step to this you just might catch an EYE JACK
And if you were intelligent, you really wouldn't TRY THAT
This is just one black, WE'LL BE BACK!

[Grand Puba going "La la la la, la la-lah" in the background]
To my man Alamo
And to the man Sincere
To my man Mark the Spark
And to my brother Melachon
And Skeff Anslem on the board
Aiyyo check this out
We got some shoutouts for my man Grand Puba
youknowhatI'msayin since he doin the "la la-lah"
He wanna say peace to his man C-T-W-O
To my man Zee I'll see you real soon!
Explain lyrics
Correct lyrics 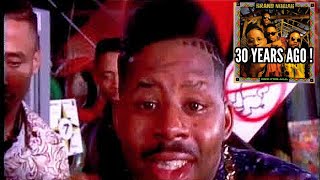