[Ms. Melodie]
Extra extra, read all about it!
KRS-One's rhymes, have been doubted
Suckers stepped up, and got MURDERED!!

It feels good to grab the mic and just allow yourself to chat
The master of the microphone is here and he's black
Recitin poetry, beautifully articulated
Demonstrated by the never faded strong facial feature
of the teacher, I am the teacher, you can check it
The styles they're doing, is from my old record
They bought my album, for $8.99
Studied the style, then wrote they own rhyme
I don't mind because I'm here to show
The lost MC's which way to go
So here's my rep, to those that slept
And didn't get the first concept in depth
I am the manifestation of study
NOT, the manifestation of money
Therefore I advance through thought
Not what's manufactured and bought
Concentration, and calculation
Goes into every song creation
The first and second album rocked you
Third album made you think and got through
Didn't you think I knew?
Number three, wasn't for the dance crew
But it gave me a chance to see
Who was REALLY down with BDP
I set the warm milk, in the glass
And the snakes came out the grass
They don't realize I'm not confined
Nor trapped by space and time
I am a rebel, an overthrower Descendant of the black man Noah
Radio DJ's, all around
Constantly tell me how they are down
To uplift Africa and unite black
Yet they fronted when I dropped _Why Is That?_
It's a fact, I don't beg for juice, I just get loose
And demonstrate the truth
Many MC's can only rock the many
But I rock a few with my brother Kenny
>From twenty-thousand to ten I'm housin
African culture is what I'm arousin
In your consciousness, soul and body
Pay attention while I rock the party
Cause now I'm gonna show ya how the East Coast rocks
Bumpin sucker MC's out the box
Rockin the dreadlocks and the flattops
I like these ops, so I'll try not to stop, but drop
The new hip-hop, and get props
Scott La, Scott La, Scott La, Scott LaRock
Spins in heaven, while the earth I rock
MC's adopt, the styles I drop
They got no direction, they got no direction, they got no direction
So they wanna go pop
Chasin the charts up and down like suckers
Totally ignoring their sisters and brothers
They're the ones to say you're number one
Not chart position, so pick up the drum and hum
Sing along, it's a poetry session
Mathematically applied, no guessin
I'm fresh and dope and wild and wicked
get your ticket, come straight to the jam I'll rip it
Original lyrics, original lyrics, original lyrics, Kenny Parker on the mix!

[Special K]
Yes yes I'm Special K
On New York's Two show on WBDP
This is the brand new one by KRS-One of Boogie Down Productions
And it's off the Edutainment LP
Wanna send a shout out to the BDP Posse
Of course to Teddy Ted, Nice and Smooth, D-Nice, D-Square
And my man Fish, Sidney Mills, Ms. Melodie, Willie D
And of course me... seeya!
Explain lyrics
Correct lyrics 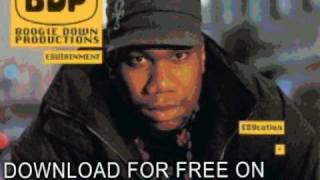