Indeed truly we are the mighty mighty BDP posse
This is our 4th album and we're STILL not takin no shorts
Yeah.. ha hah!
On the wheels of steel, is Kenny Parker
As we say he can't get no darker
All about action, not a fast talker
All the whick whack sucker DJ's
gotta try much harder
My man Willie Willie Willie D
Taggin up BDP with a fat marker
And THIS, is what's on today's charter
Ha hah hah
All the ladies in the place throw your hands up in the air
BDP rockin without no fear
So Kenny Parker if you know what time it is
throw the funky fresh beat in like this

Ha hah
Well it's me, down with BDP
KRS-One rocks ANY party
Rocks the beats, and the breaks
Rock the socks off the frauds and the fakes
The suckers shake, while I'm creatin
They get together and they start debatin
How can we take him out one time?
So they push up the best with the freshest rhyme
I might go first, and he'll go second
I'll wreck him, deck him, say to him, "Just checkin the mic"
Droppin fresh styles I like
So throw up your hands and drop your mic
Cause I'll go third, and he'll go fourth
By the fifth you're dissed cause you lost
Six is your beatdown, your title is seven
Takin out your four man crew makes eleven
By the twelveth well I'll go for self
Rockin New York like no one else
You can check any rapper from seventy-eight
A few have rocked their whole career straight
Some had dope twelve inches, count em
But not many crews had slammin albums
BDP rocks CONSISTENTLY
From _Criminal Minded_ to 1990
Why? Well that's my secret baby
Here's a hint: the public pays me
So you can call me a public servant
Not a King but a teacher, I'll believe I earned it
So I just walk, or ride my bike
If I walk to a jam well I'll rock the mic
Gimme a chance and I'll rock the house
But don't let a sucker try to take me out
Cause male or female, I will strangle
If it's a crew, they'll have to untangle
Adidas, Nike's, arms, mics
Turntables suckers in the wheel of my bike
Step right up if that's what you like But watch your head cause it'll fly like a kite
In the night at a height right for flight
Way out of sight, you bite, I recite
My style is bright, still you're sellin out to white
As your faggot DJ would say, "Well alllllright"
I am your mentor
Victory is mine, it's time you surrender
Sucker! And just back up quickly
Your style is sickly, but you persist to get me
or outwit me with the style that I created
years ago when you was doin a dollar fifty show
Oh, all of a sudden you don't know
or can't remember, can't recall, can't bring to mind
that rhyme that place do not chase
I run a marathon a race of rhymes in your face
In case you bass I'll erase your whole rap
Tell you right now I ain't TRYIN to hear that

I don't dress up to rap or keep a hairdo
I only grab the mic and bust holes in a crew
I deny your existence as artists
You're puttin out a record expectin to chart
but it's weak, but when you speak through the microphone
You fail to realize nope you're not alone
on the earth, the light comes forth as KRS
Intelligence, force, and love manifest in the flesh
I snatch the mic and shed light
Behave, you're still a 20th century slave
Headed for the grave in a wave
So save the microscopic miniature small talk and walk
and put a little pep in your step
KRS-One will destroy any ignorant reputation
in the nation, in creation
Princes, Kings, Queens, or any occupation
Like rappers with nuttin to say
I crush those idiots and throw em away
Cause no matter how fatter the wallet, I'd rather
gather together and splatter whatever
egotistic mystics, with macho poses
If you ain't for black you're down for Guns 'n' Roses
Yeah! C'mon!
Throw your hands in the sky
And wave em from side to side
And if you're in this life just gettin by
Somebody say, ALRIGHT! (ALRIGHT!) ALRIGHT! (ALRIGHT!) 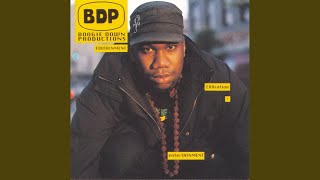