Every time I go to dinner
Seems like I'm getting a little bit thinner.
I'll sit down at the breakfast table.
I can talk, but they're not able.
When I look at them I find.
There's a single question on their mind.

I wish it could go back to the way it was
It's not easy now because...

My whole family thinks I'm gay,
I guess it's always been that way.
Maybe it's 'cause of the way that I walk
Makes them think I like... boys.

The goddamn question just won't go away.
And I get asked every single day.
But the way they ask it is not a disguise,
Like, "Uh, how was your day? Do you like to kiss guys?"

This is the worst,
Baby this was my fear.
Now their opinions are crystal clear.
Because...

My whole family now is shocked.
I'm in the closet, and the door is locked.
Now my glory days are gone
I was John Elway, now I'm Elton John.

Just 'cause I go to an all guys school
doesn't mean Justin Timberlake makes me drool. When I go outside, what do I see?
That the clouds in the sky spell F-A-G.
Because...

I think that God might think I'm gay.
What does He know anyway?
My grandma gave me a present just last year,
And the card said, "Happy Birthday, Queer!"

Cause' My whole family thinks I'm fab.
There's a guy's butt hey, Bo, take a stab.
Why doesn't he get women?
There's no other way.
It's 'cause I'm lanky, not 'cause I'm gay, alright?

Just 'cause I'm afraid of the snow.
Or my favorite color is the rainbow
I don't mean to yell, but I fear I must.
'Cause I'm losing the people that I thought I could
trust.
Because...

Because...
My whole family thinks I'm gay.
What do they know anyway?
You gotta look right through the haze.
Easy-Bake Oven was just a phase.

My whole family thinks I'm queer.
That is all I ever hear.
But I've been as straight as a ramp,
If you don't count Bible camp.

I'm not gay I swear. 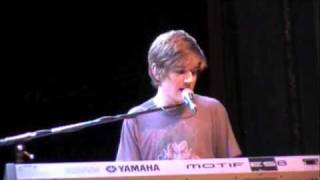 check amazon for My Whole Family mp3 download
these lyrics are submitted by noneya
these lyrics are last corrected by SilentJade
browse other artists under B:B2B3B4B5B6B7B8B9B10
Record Label(s): 2008 Comedy Central Records
Official lyrics by