Well I'm not a qualuudes or a halucinogen
I'm just comin up with rhymes that I invent
Out of my head, or like on the spot
And uhh, whether you know it or whether you not
?? we did the Mudfoot in your town
I-I'm super-educated, ready to get down
Just check out what the heck I got to say
It's not the same ol', rhythm and rap cliche
Markie the king of a rec, I rock and put you in check
Hypnotizin recognizin plus I get respect
And if you think you can, mess with the magical man
I rock the mic do what I like and plus I got a plan
So don't be missin don't be listenin to the format
Determined like a German like a head is to a hat
That's why I qualify, as the better MC
I never treat people like they were fleas
But if you think that I got a big head though
EHHHH AHAHHHHHH! Let go my emehamahmmm EGGO

Well well well well you know it's me
The Mudfoot, yeah the Diabolical B
I-Z-abba-zee-mm-A-Rrrah, I'm a superstarrah
Always rap on mines, so I don't have to bother
I just come up out with somethin G like
Other MC's thinkin, I'm on the mic
Super, duper, MC party pooper
A tick-tock to the roc the mic and I recoup-ah
rate and I am great, my DJ is a-ight
If he say rock it to the rhythm, well rhymes I be writin
BMV Studios, didn't you know
My D-O-C is down and Jidoe
I sing, on record, I get respected never neglected
Well protected edu-I-do you know that I'm
the, oh-riginal B, I-Z-M-A-R, K-I with E
And if you think it's me, no, I think it's the
C-double-O-L V, and my man D-O-C
I get with Big E, I zugga zagga zee
I'm backwards other MC know what this mean
Hellafied king, I do my own thing
Make the microphone sing, and you know that I bring
And everytime I rock, I don't got a big head though
FORGET THAT! Let go my mm-ah-ehrmm-mmah EGGO!

Now a lot of like people wanna know about me
The original diabolical energetical
B-I-Z-mmmahhhzayy-Rrrah superstarrah of rap
And it don't matter to me, I'll make your hands clap
Best in zing, the man appointed rap king
Down to wreck your body, I make the 'phone sing
That's why I say zzznoahh, MC shower
Hey, in Junior High School I say Shenandoah
and, bedknocks and broomsticks
with my DJ Cool V, that is on the mix
I do it out of my head-n, from hear to Homestead'n
or even Belleport cause it is my sport 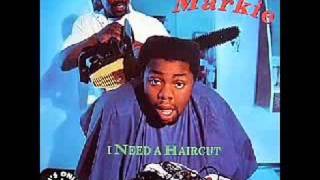