Manslaughter, walkin on water
I stay afloat with a note, the way a boat oughta
I'm too poetically inclined, one of a kind
True and divine the genuine, breakin a bond and gettin mine
so freeze, I'm makin it flow with ease
And droppin the funkiest lyrics that ever been known to MC's
Cause I can recite it fast, or even rap slow
Huh, man I can just talk and my shit'll flow
Because I mastered the rhythms of winnin lyric
Hit em, just the flow itself'll tell you that I did em
So let the K-to-the-A-to-the-N-to-the-E
show you the meaning of real harmony, as I float

Peep this
I'm always on the down-low, smooth and mild
But when it's time to get wild, huh, you know my style
I drop lyrics wham bam by the gram on a jam
and gooooooood DAMN!
It's like a disaster that nobody goes after
Rappers turn ghost like Casper
Cause battlin me, you'd only meet your fate
You'd probably come out better tryin to fight in Kuwait
To be smart, would be not to start
Not even The Wiz can give you that much heart
Rap is like an art.. and man you know
that kind of makes me like Michaelangelo
Not to sound conceited, or either to boast with what I said
cause I'm too modest to ever lose my level head
But if I ever got bold and said I'm higher
I can give more reasons than Earth, Wind & Fire Many follow in the footsteps, tryin to get a rep
of a lover and a smooth black brother
But I'm knockin imitators out the box
Because you couldn't copy Kane if your name was Xerox
I'm like the God in light, some of my writing might
be too much for your mind to explode like dynamite
And if it sounds good to you then get on it doggone it
Capture this like a Kodak moment as I float

In this third verse, I'll make it sure mental
See the way that you serve rap's like a death penalty
So back up off me, ain't nobody stoppin Kane
I'm shittin on rappers like I never been potty trained
That means defeatin deletin and beatin
while all the tenderonis I'll be meatin and greatin and treatin
And welcome to a new Terrordome
When I come to roam, you know Daddy's Home
Rhymes come at you full powered with might
They call in the SWAT team when I start to write
and declared my lyrics illegal weapons in every state
So I can get five to ten for carryin a Papermate
Just a little bitty taste of this'll burn so bad
you'll wanna call me the Big Daddy Inferno
So don't even think about a battle, I sail without a paddle
In other words, I FLOAT 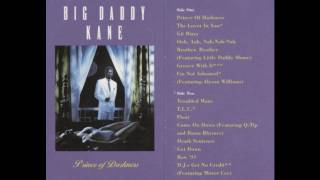 check amazon for Float mp3 download
browse other artists under B:B2B3B4B5B6B7B8B9B10B11
Record Label(s): 1991 On The Low
Official lyrics by