(Talking)
What's Happenin Mayne?
This Lil' B Gizzle, Ya Heard Me
At any given time it could happen
So I'm here, you know I gotta make it happen, Look

Verse 1:
I'm a street nigga, I live my life on the edge
and the last on the streets gotta know how to play
Niggas don't play fair, they be telling the feds
All a nigga business where he drive, where he stay at
Thats f*cked up, thats cold, thats sour
Keeping it real is the code I follow
I honor the street code, don't rat, don't snitch
Get popped, be a man and take ya lick
I done backed out, I done gave the game up
The life I was living dawg, I had the change up
Eventually, I would end up banged up, stressed out
Uptown somewhere with my brains bust
I ain't rocking like that, Nigga I'm trying to live
I ain't trying to get killed, Trying to get these mills
Trying to f*ck these hoes, do these shows
and cop my whole click benz 5 double 0 (benz 5 double 0)

Verse 2:
Nigga thought I was gone and I never stopped druggin
When I first left it alone, nigga thought I was stuntin
Almost a year strong and I ain't done nothin
Still get my grind on cause nigga I love hustlin
Addicted to gettin hoes and gettin this money Addicted to slangin dick cause Gizzle love f*cking
Need to go to rehab cause I love head bustin
But I love the streets, I'm always be thuggin
If you a game stashed nigga, you gotta know how I'm coming
You gotta know if you want drama, nigga then its comin
Cowards hatin on me, even much on my block
They don't want to see they only nigga on top
I won't let they worry me, They know how I'll let Juvi rock
They know if they get out of line, I'ma make it hot
I'ma make it stressful, I'ma make it hard
They can't hang nowhere from the 3rd to the 9th ward (3rd to the 9th ward)

(Talking)
That's how it is, ya heard me
I know I could've been dead yesterday
Living today, I prolly get loaded tomorrow
Now I'm doin it right now, It's cool though ya heard me
Ain't no disrespect, It ain't no more Cash Money, no living in New Orleans
It's 2004 Chopper City Cutthroat, Ya heard me
That's how we playin it, Those who layed this right here Baby
For real, For real 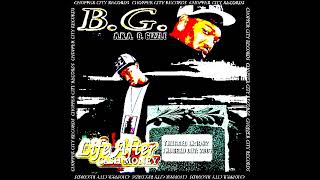