Enlightened by deprivation, the iconoclast rules the day,
But chained in incarceration, the beast of slavation was enslaved
Rage with every lie seen, the sight of false societies

Satanic minions swarm to form a trojan horse Storming through the tides of inferno
Trampling of a sickening race
Repel the pious curse, destruction of grace

Rhetoric of wretched followers, verbal defecate
My sword casts the first blow, lambs of god slain and raped
Blaspheme the towering walls of the foul conglomerate
Spill blood on the pulpit, consume with flames, incinerate!

Warning is too late, extinction the deliberation

Dawn brings no tranquility, continue the endless slaughtering,
Every last drop of humanity's blood shall soil this infected planet! 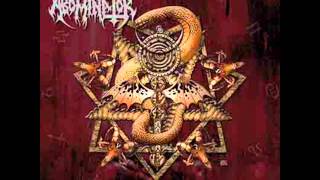