Tyrants On Your Warpath Lyrics

Tyrants On Your Warpath Lyrics

Elite powers, wretched beings, using the elements to suppress me
Grasping the earth with their stranglehold of malevolence
The hordes of plutocracy, feed on the nature of hypocrisy
Unable to contain the malignant eroding world decay

Breeding untold bitterness, darkest disillusion
Stab at their hearts with brimstone resolve
Spit in the face of irreversible destiny

Subjugate our hope, wrongful abuse of power
Their motives an inferno, illuminating our final hour

The darkness shall soon have it's way, by stealth you will obey
Leading us to a chasm world grave,
Tyrants on your warpath, you're enslaved!

Coersed into madness, a fictional discipline march Plunging us headlong into oblivion
Lucifer enflame our pride, repe their souls in time
Storm of retribution in the skies, expose their flagging altruistic lies

Enforcing invisible beasts, bringing us to the brink
Axis of cosmic chaos and death, end this immediately

The corpses of plutocracy, succumb to armageddon's ferocity
By the scars in your bloodstained hands, defy this dead world command

Tyrants on your warpath, serve in pain!

Lucifer enflame our pride, rape their insipid souls in time
Storm of retribution in our eyes, reign the sulfur from the skies!
New world imperium is here, SUFFER! 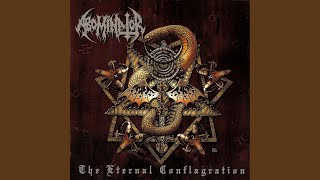 check amazon for Tyrants On Your Warpath mp3 download
these lyrics are submitted by BURKUL4
browse other artists under A:A2A3A4A5A6A7A8A9A10A11A12A13A14
Record Label(s): 2008 Displeased Records
Official lyrics by