[D-Reck]
It's whatever whenever, wherever baby
You gotta have bread, if you want it all gravy
Country like jeah, but these cats can't fade me
Heard what I said, so don't try to play me
I came to Wreckshop, came to blow the spot
Like nitro I'm bout to blow, cause my flow hot
Since the days of P-A-T, I've been holding down the streets
Got a deal and got to eat, putting shoes on his feet
The Lex needs Spre's, let me defreeze
Music is to bleed, but the game getting sleeze
Why this broom in my hand, like I'm the sandman
Swooping...off the stage, snatching mics out they hand
Now it's my time, gots to put it down
Even if it's night, I can make the sun shine
In this game I'm making hits, the Shop is the...
We the lottery pick, ain't no stopping this

[Noke D]
It's the Noke Deezy, man I'm off the heezy
I came here, to do my thug theezy
Please believe me, I wreck shop
Every damn hood, every city, every block
Got it on lock, muy caliente
Riding like Sensei, rolling on vientes That's 20's, if you didn't know
My whole roll, sold with your...
Moving too fast, you need to slow down
City of Syrup, call it H-Town
What you lost, is what we found
Platinum songs, platinum bound
See I'm a platinum soul survivor
I'm a platinumlly, provider
I'm a platinum ghost rider
And I'ma always be a platinum street fighter

[Z-Ro]
We came to Wreckshop, until the Shop is wrecked
Surrounded by A-R 1-5's, and glocks and techs
It's Z-Reezy, D-Reezy and Noke Deezy
Sipping on something purple, blowing treezy believe me
Making it look easy, when I'm doing my thang
Whether Southwest red, or hoover blue in the game
Got our grind on, lying to fellas that's outta line
About to burn me the plex...chest with that iron
Feeling fine and lovely, even when it get ugly
I know I'ma make it, because the Lord is above me
Divine in the bench, and make me hard to hit
Hating me is like a habit, and it's hard to quit
I'll be chasing paper money, making maneuvers I'm mad with it
Acting like a fella, that ain't never had with it
I'm a soldier united for cash, worldwide
I do the body rock, and then I do the Southside 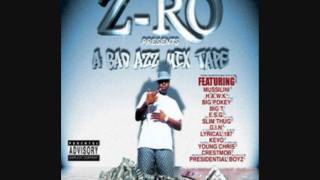