Come with me, ain't nothing changed I'm the same old G
Seem like it's my to shine, like the diamond cut in my grill
La da da da da, I'm real

[Z-Ro]
You can catch me flipping, and sipping and smoking
Up in the turning lane, with the doors wide open
We serious bout our habits, we never be choking
Catch us chain smoking, and violently choking
Why don't you wanna light up the blunt, that's in your hand
I'll pat ya with the 4-4, that is for sure man
Ain't no more breaking a leaf, ain't nothing but that dro man
Mess around and get too tipsey, you'll be on the floor man
Popping up, until I feel about as strong as four man
We don't smoke rocks but they are over our hand
Remember back in the day, I use to be a poor man
Now I'm gifted and sipping daily, with jewelry frozen

[Lil' O]
Uh, they say I'm acting funny, they saying O's strange
They saying no don't come around, nigga O's changed
Man O tripping man what's going down in O's brain
Talking down on me, them niggas still ain't having no change
See I don't really talk it, I just live it
I don't say I'm gonna, I just get it
Give a playa the ball, he 'pose to run with it
But these niggas rapping gossip, like some dumb bitches Like how he get that Benz, how he get that dough
Yeah I got some bread, but wanna get some more
See I went from grinding, all in front the liqour store
To a made man, I'm top knotch nigga role
And you could do it too, this should inspire you
To get ya change, get out the game and retire fool
Before these streets f*ck around, and retire you
You saying O ain't real, you a liar fool

[Kevo]
Mama say she hate game, but can't avoid mine
She know Vo' ain't giving shit to a hoe, but hard dick and hard times
I'm the homicidal Hitchcock
A sex addict and a weed fanatic, so tell me how could shit stop
Cause I'm real, ask Ro' I ask hoe how I spill
I spit rocks at my grill that's worth a mill, yeah a million bucks
My mouth piece armed with invisible sets and trillion cuts
This boy throwed, I thought they told you nigga Presidential code
You can see it, when I'm hauling in my load
My Escalade, all work no play
23 screens and eight 15's, that's tucked away
So you can, keep watching me and
I'ma pop this E man, after ecstasy the desert eagle
Followed up with a solo performance, from my HK to all ya people bitches 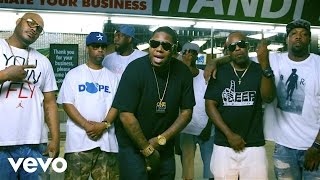