Osama Bin Loden is dropping bombs man, in a situation like this
How can I reach calm man, calm man, my nigga
This is hard times, like its so much gun smoke and see the stars shine
We living on dreams but is they coming true, what I'm gonna do
Make a million and pull a stunt or two, a stunt or two

[Trae]
Step into the world of a mob nigga, live in so much pain
The rain steady pumping me up, locked down on hard times
But I'm knowing that I gotta make it, running on my deadline
Giving out flat lines, cause if you think that I'm feeling
f*cking up by mine man, I gotta maintain
Its like everything that I had, it won't ever be the same
I feel I'm sicking home the cemetery
Cause that's where all of my people rest
I can't take the stress, I'm fin to send it through somebody chest
That's why I walk around pissed off, strapped with a vest
I done been through a lot, ready to release the glock
Vicinities South, a brother on my Dickie, I be ready to ride
And I'm sick of this shit, I ain't fin to be hiding out, lately
Street life's got a nigga lost, will I wind up in a coffin
I don't know, I'm about to blow, I don't wanna take no mo'
But when I bust in a rush, you better hit the flow
Reality is a motherf*cker, that's what they was telling a nigga
That's just the truth, I lost my nigga Screw
And Relay too and Andrew, now what about Danny Boo
That's f*cked up, growing up in a childhood all alone with nobody
No mama no daddy, Z-Ro I see why these niggas can't relate to us
Cause we them thugs of another kind
Making these niggas feel us two rhymes
Cause if they lived the life that we live
They'd probably be broke down, crying and dying

[Z-Ro]
Living in the ghetto, everyday is a motherf*cking test
And I just can't rest, gotta keep a vest around my chest
Seem like everybody wanna start a little plex
Nigga but not me though, I'm trying to focus
On bigger and brighter thangs
Steady trying to come out the storm
From hurricanes, to heaven and lighter rain
Running away from the police
Nigga f*ck peace, its all about war Nothing but a AK and a HK and a Tommy Gun
Sitting in the back of the car, I just can't cope
Everybody is a suspect, even if you don't bust I'ma bust back
We down to ride and, all you little
Bitches and niggas get off my nut sack
Been 18 lonely years, since I buried my T Dogs
When I be shooting the breeze
But I'm still conversating like she ain't gone
You can take a look at this light of mine
Never did glimmer, never did shine
Cause I resort to a life of crime
And I know I'm wrong, but I gotta get mine
Fools don't understand me, a nigga be nervous 24/7
Puffing on sticky, eyes redder than period candy
Look at my pockets, I might as well stop it
Because them hoes on flat, look in the freezer
And a sive, ain't nothing but a stomach, these are hard times

[Trae]
Ro pass me the AK, one of these niggas
Fin to pay for everything that I'm feeling, ain't no more healing
To the head with lead, is the only thing I'ma be drilling
My nigga this hard times, and the way that it look
I don't think that it's gonna get better, the only thing that's here
Is to suck it up, inside I know that's why we not giving a f*ck
Ready to bust, on anything this life feeling, like we on our last breath
I'm quiet as kept, my nigga don't start
Or else somebody gon see they death
Or hate us like that, but this side of Trae it be like that all times
The only thing that I know more than pain, is pain and me never dying

[Z-Ro]
Poverty stricken and headed to prison
Running because of the life, you looking for codeine
Or amphetamines, I got em at the cheapest price
Living by the rules of the street life, fin to get niggas
Better beat the street light home, after dark I par-park
Everybody be tripping, attempting to get rich
Dig a bigger ditch bitch bleed, I'm a motherf*cking man
Trying to do all that I can, I always held my ground
And I never ran, got shot for taking a stand
I need a plexing, because I'm stressing, losing my mind
Smoking wesson, my head I'm pressing, hard time 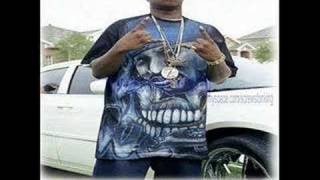