Got this bitch named tasha, She let me f*ck her in the
car.

Got this bitch named Britanny, With BIG ASS TITIES.

Got a main bitch, but i don't need her.

Everytime we f*ck, i gotta pop a bean first.

Hit the purp, then eat that p*ssy for dessert.

It gets worse, just watch when she squirt.

I got this bitch who act Sadity,

She live in the cities,

Everytime she hear i got a new bitch, She says she miss
me.

Imma thug, Got this thug bitch she stay up in the
Jungles.

Everytime we go to Crenshaw Mall, she have a Rumble.

Got this bitch in the Hoovas, I don't wanna losaaaaa.

Ass so fat to measure it, i need a rulaaa.

Got this Bad Bitch, that go to Northridge.

She always wear gucci, but she can't Afford It.

Take a bitch life, Now it's my life.

Turn a bitch out, make her lick twice.

Yeah she eat p*ssy, but she don't f*ck dikes.

Laid in the middle, two ? Alike

Kind of money make her come out her Leotard,

YG tell them bitches wassup, they ready to cut no,

links in my suit, we don't cuff em,

I dont even know the sound them bitches make
cuzzzzzz....

With ah whole a lot of ass, and get right with it,

Off a pill, i can prolly' make her like bitches,

These hoochies always talkin' bout, where my dick is,

But if it's not in your mouth, then get out my
business,

Known to f*ck and cut her off, Lightswitches.

You look good, but to me you just a bummy bitch,

And the funny shit is, you know my other bitch,

Met me through her, on some under cover lover shit,

Got damn, ain't that your homegurl?

Scandalous bitches, we livin' in a cold world.

And everyweek i change my number to my phone cuz... 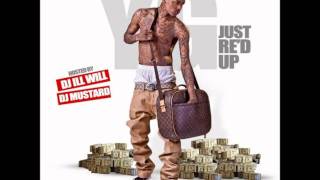