Taunted and troubled, he raises his hand
Draws his fist, lets it all fall loose again
He's chained to his life, it's a walking, talking death
And he's losing his grip with every passing breath

Weary eyed and weak, he pulls himself up
Tries to take a drink, but he drinks from an empty cup
Yellow running down his back, blue across his face
He was giving his colors in the human race

Well his features are worn, there's darkness in his eyes
Some say madness--it's the perfect state of mind He hears a rumbling silence that's louder than any words
To him it has more to offer than anything he's ever heard

So tell me, where can he go, which way can he face?
Does the wind blow
For another nameless face? 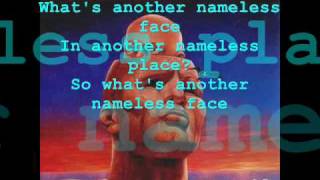