Twilight ebbs and slowly,
heaven sparkles light.
From pin pricks in nights curtain,
something comes to life.
A star is falling, tearing though the dark.
In the morning,
darkness fills my fathers heart.
A distraught David calls at Kathy's house.
'Mrs Wilson something's wrong with Kathy.'
'Don't be silly David Kathy's OK'
At the police station a concerned sergeant is on the
phone.
'Hey Doc, I've got little David here,
would you come over and take a look,
he seems pretty upset.'
Scared, alone and huddled in the corner of a cell is
David. The Doctor enters and asks softly,
'Now David whats the matter?'
He hesitates
'First Doctor can I see the back of your neck?'

When I asked Dad about his neck he said he caught it on Barbed wire in the dunes,
but theres no barbed wire over there,
and he hit me and Dad never does that.
I called for my best friend Kathy on the way to school.
She acted like she didn't even know me
and she had the same mark on her neck.
The police chief is possessed she put a probe inside
his head.
Mom and Dad are acting strange I think they want me
dead.
Stuart Kelso will believe me,
I know that they are here.
I saw them from my window,
into the ground they disappeared.
Could be a mother ship on Mars,
and mutants all around.
Better tell the General,
War is waiting underground.
A few billion miles away,
they came from outer space.
Now all hell's breaking loose,
down at little Kathy Wilson's Place! 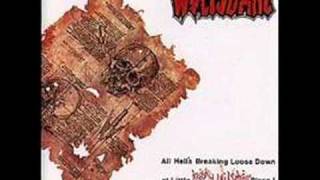