Intro (Dialogue with Shaggy 2 Dope & Violent J):
Crazy  f*cking fun. Yeah when that bitch fell in the mud, I was dying heh
Yeah  and another bitches f*cking titty fell out!
So you sure you'll be able to get home, man?
Yeah if I don't fall asleep
Hit  me up with a text or something when you get home so I know you straight
Yeah,  aight
What ever happened to Court? We was f*cked up and then just disappeared
He  was talking to that one fat broad
He might end crashing at Tony's house, too
Yeah, probably man
Well hit me up when you... (doorbell) oh, shit that probably Court right there at my door, somebody's at my door
Shit
Aight, well, uh, hit me up just so I know you made it back, aight?
You know I will, peace

You lock your basement doors, you wedge them shut with chairs
Your dogs are f*cking barking, They're coming down the stairs
Leaning on your doorbell, they're banging on the walls
Your'e sweating in a panic, and running down the halls
They're wondering your home, but you don't know how many
You've only got four shells, you're hoping that it's plenty
Shadows on the window, outside on the grass
Someone's in your kitchen, they entered through the glass
You're hiding in the bathroom, you hear the dogs attack
You run out for the f*cker, and shoot him in the back
His body hits the tile, but still you think he'll leg
You smash his f*cking head in, crack it like an egg
Another from behind you, you shoot him in the ear
His head flew off his body, it landed in the chair
One more shell left, sill kickin in your door
You whip the f*cker open, and blow him off the porch

911, what's your emergency?
Yeah, I'd like to report a home invasion
What, what's your location?
I got four motherf*cking dead bodies, y'all need to come over and clean up
I'm sorry, did you say dead?
Yeah, that's right 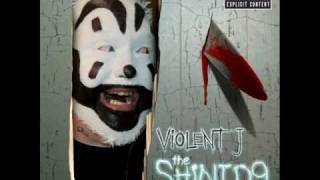