If I Was God Lyrics

If I Was God Lyrics


If I was God, I'd probably try to clear my brain,
Kick back up in the heavens and see what we can change
First off, I'd have no guns, just hand-to-hand combat, only the strong survive like cavemen (I like that)
If I was God, the sun would blink from time to time and black out, I'd introduce a newer style that put Easy E back out
I'd f*cking ride up in the sky up on a cloud floating around, both granting wishes and throwing lightening bolts down
If I was God, I'd show up and host 'Saturday Night Live', just to freak 'em out and let everybody know I'm alive
If I was God, I'd explode every crooked preacher's head, right then when he's screaming and preaching, face all red (POP!)
If I was God, I'd go and try to whoop the Devil's ass, but it probably ain't that easy and I'd probably learn it fast
If I was God, I'd ride a dragon down to earth, pull Bin Laden out the sand and f*cking kill him myself
If I was God, I'd turn pop music upside-down, we'd have the 'Top 40 List' be the 'Top 40 Underground'
I'd watch Twiztid take home seven Grammys or more, I'd see Boondox ridin' front page of the Source
And somehow, I'd be about to marry Beyonce, telling the paparazzi (all y'all, get the f*ck outta the way!)
If I was God, I'd grow my face hairs long like Moses, hit the club in an iced-out halo and see where the hoes is
I'd cork all the world's volcanoes and let this bitch blow, and then rewrite the timeline so that it never happened, so I'd do it again and again and again and again, everytime I needed to express my anger within
I'd fly above the city as a giant with searchlight eyes
I'd let you motherf*ckers know that I'm watching, ready to energize (I got them lightening bolts)
I'd turn the prisons into country clubs, make a lot more hotties be attracted to scrubs
If I was God, every now and then it'd rain dynamite, just to keep you on your toes, make sure you got your shit tight
I'd bring the dinosaurs back just when nobody expects it, send your prayers to each other see if you're gonna reject it
I'd give everybody free rewinds for shit they might've passed up,
I'd cure the sick of disease and let the crippled get they ass up
I'd make it rain money everywhere that it's needed, crooked cops would get they ass beat and shit would get even I'd do a lot of shit different, but I don't know shit
I'm so happy that I ain't Him, my head about to split
I'd f*cking make it rain indoors, I know that much
I'd take a photo of me with the Devil in a camel-clutch and put it on all the TVs for 24 hours, make giant meteors pass by the earth within a couple yards
Shit, if I was God, I'd walk around the city like King Kong, kneel down in the street and f*cking peep in your home
If I was God, jealousy would be easily detected, their faces would turn that of a demon everytime they felt it
f*ck an earthquake, I'll shake this bitch dramastically, pick the earth up shake and pepper my spaghetti with trees
Holy shit, ya'll, what the f*ck would I do?
If I was God man, f*ck what the f*ck should I do?
I'd give all the hungry and needy pizzas and steak and cook it all over the flames of Hell if that's what it takes
I'd drop a couple new animals every f*cking month or so, and send a few tornadoes through where they don't normally go
I'd not only walk on water for you, I'd hammer, slide and boogie and snap my fingers and give all the little kids each a cookie
I'd send snowstorms to the desert, heat strokes to the arctic; three times a year visits with your dearly departed
I'd put about 10, 000 real Jason Vorheeves out there, just to add a fresh element of fear in the air
I'd throw angel picnics and parties, we'd get drunk and come down to earth, probably picking f*cking fights up in the church
I'd have a stretch limo so long, the front's already there and I ain't even left yet
Faygo lakes everywhere
I'd jog inside the earth and make it spin like a hamster wheel, I'd have aliens come and try and make us their meal
But that's exactly why they gave the job to somebody else
Or is there a 'they'?
f*ck it, figure it yourself 'cause I ain't got a clue in hell
Shit, man
I'm probably f*cking going to Hell
f*ck it, man
What?
I'm going to Hell!
Shit, I'm probably f*cking going to Hell!
f*ck it, man
I'm going to Hell!
Oh, you know what?
I'm probably f*cking going to Hell!
Oh, I'm going to Hell!
Shit, I'm probably f*cking going to Hell!
I'm going to Hell!
Oh, you know what?
I'm going to Hell!
f*ck it. 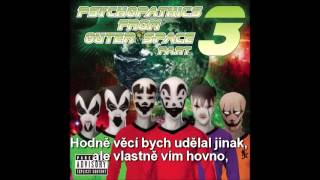 check amazon for If I Was God mp3 download
these lyrics are submitted by kaan
browse other artists under V:V2V3