[Bun B]
Now I could talk about, a car or some paint
Maybe jewelry that I bought, that you probably can't
The broads that I f*ck, the people that I meet
But that shit won't help a young nigga, survive on the street
I can tell you bout how many, blocks I bled with the crack
Stood outside every night, trying to get myself a stack
But when niggas run up on you, with that thang to your back
Is your motherf*cking ass, fin to know how to react
See hustling is some shit, that a nigga is born with
Not some game from a song, you can try to get on with
Now you can buy every song, bout crack ever made
But if it ain't in your heart, you ain't fins to get paid
Now read some Iceberg Slim, it might get you a bitch
But you'll never have a stable, you'll never be rich
Memorize all your Screw tapes, it won't make you a G
Cause niggas dying out here, trying to be they favorite MC

[Hook: Devin the Dude - 2x]
Do whatever you please, say whatever you want
But don't fake, don't front naw
Cause it ain't hard to get touched, to get roughed up
To get f*cked up, y'all
[Trae]
Lately I've been zoning, trying to get away from all of the pressure
These wanna-be G's that wanna-be MC's, need to get they shit together
It's whatever, niggas thinking they thugging cause they crunk off Pac And everytime they step out on the block, they be the first to get shot
I don't know what you thinking, but dog we keep it gangsta for real
We took everything that we lived, and then supplied it with skills
I don't need no handout, cause I grind and I can shine on my own
Everything I talked about the memory, I ain't just make up no song
Better check my bloodline, everything I represent might get you shut down
Been in the midst of guerillas, respected I never backed down
I'm faithfully mobbing, while y'all be faithfully faking
Perpetrating trying to play that roll, will get your life faithfully taken
And dismissed bitch, you don't wanna get caught up in that street hype
If you ain't been in these streets, then you won't make it in that street life
I'm telling you mayn, better leave that dick-riding alone
And go on and do what you do, and take your fraud ass back home

[Trae]
A lot of thangs be on my mind, all the time
Move around, a lot of niggas be out here lying
All the time, so they can shine
But as long, as they don't cross that line
Anytime, I don't pay you no mind
I just gotta be me, niggas you need to be you
What you lying fo'
[Hook - 2x]
Explain lyrics
Correct lyrics 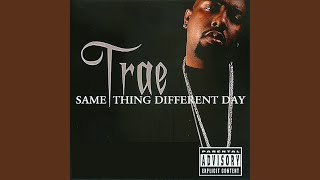