MC's in ninety-five they need way more rehearsin
They write they booty kyrics then they add they little curse in
YOu're not a true hip-hop person
Spend a little time with your rhymes and quit makin wack versions
I send this shit out to all them niggaz from that group
With the ninety minute demo sounding just like Snoop
You better bizzay, your ass up out my rhyme zone
Fore I leave you on the ground broke up like pine cones
You're rootin and tootin but ain't did no shootin
while the freshest hip-hop, it curses verses like a wicked witch
Disaster, cock the rhyme flows back to kill
To get me out your system takes more than Golden Seal
Cause I bust so many flows I gotta file my shit in columns
while MC's be goin down like Olympiads that slalom, rock-bottom
I got em, left without no watchers
While I be housin niggaz like they put up for adoption
I rock loaded, I never get promoted
But through the bullshit my crew stays devoted
While you be bustin lyrics bout the funs y'all niggaz toted
I'll be standin like a b-boy with both arms folded
But no exucses, I still get the loosest
When RIco's in the house tryin to grab the mic and juice this
So back the f*ck up like we told you last time
Cause it's the Liks in the house with the ninety-five rhymes

We can do out thing (we can do our thing), bottoms up!

Verse Two: J-Ro I wake up, kill a roach, call the homies, hit some weights
Reminesce about the shows we did in fourty-eight states
Banned in the rest, but we was on tour with who
De La, and Quest, we made the crowd say yes (yes)
Now it's like f*ck, Make Room, move your ass out my way
Bay-bee, bay-bee
WIth all these hoes around clwon, why you wanna bang?
Let's have a celebration like Kool and the Gang
I bring it all the way back, like a punk return
I rock some spots and call more shots than Chick Hearns
The only MC I like is Amante
I was drinkin Asi Spumante wit cha auntie
Bust them lyrics shots from the AKG
When it comes to style and finesse, I'm the epitome
Hit a beat, make em all retire, flyer
higher than a jet, like Stet I'm on fire
Causin pain like a runaway train you don't stop
Drop the track, now watch it flow back to the top
I'm the J-R-O, not J-E-R-U
And you know what we came to do, bottoms up!

When you hear screams, that means King Tee walked in
The advertisement, and that nigga's bent
Raise up off the wall, bitches Last Call
Ready for the ruckus, pushin motherf*ckers off the stage
Teela's got a brand new gauge
So Make Room, for the crew with beats that
I got a complex I guess I bust best with stress
A mess, don't bring that shit to the West, cause
Uhhh, I bring drama, like Jeffery Dahmer
Choppin up MC's with they mama
Ah-hah! Oops I made a funny with the dozens
The one-est, who busts rough rhymes for the cousins
Super Nigga's comin! Faster than a bullet
Leapin over buildings, wavin at the children
And don't even trip cause the Alkaholiks funk don't cease
Tash I'm up out this piece 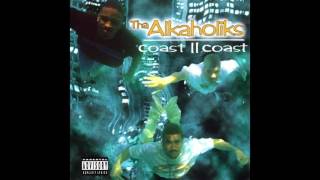